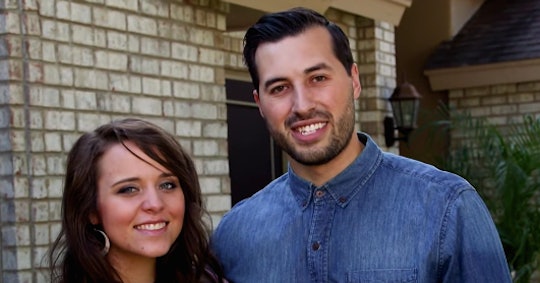 Watching my belly grow has been one of my favorite parts of pregnancy so far. Knowing that my baby is getting bigger by the day is just amazing. Despite my enjoyment, given how often expectant celebrities get shamed, I haven't been too keen on sharing my changing body over social media. Recently, one Counting On star got flack from fans for not "showing" enough in a photo and honestly, it was ridiculous. Over the weekend, though, Jinger Duggar shared a new bump update with her fans, hopefully shutting down any unwanted criticism and unnecessary commentary. Pregnancy is such a personal journey and too often women are shamed throughout it. Every woman's body is different, and bodies during pregnancy are no different.

Duggar shared her latest pregnancy update at 25 weeks on April 6, showing her newly showing tummy. In the update, she shared that the baby — her and husband Jeremy Vuolo's first child together — is now the size of a cauliflower. Fans commented on the post pointing out the changes in her body and celebrating her progress, as In Touch Weekly reported. "You popped out a lot in a week!! Baby is growing!" one of her followers wrote. "Pregnancy looks amazing on you! Praying for a safe uneventful pregnancy and delivery! May God bless you and your family," said another.

But just before she shared this most recent post, people were shaming her for her bump — or lack thereof. Vuolo shared a photo to Instagram of himself and his wife visiting the Magnolia Silos on March 29 and fans were quick to comment that there was no visible bump. Numerous comments like "Where's the bump?" and "Still no baby bump?" were posted under the photo.

This isn't the first time that Duggar was shamed during her pregnancy. On a post from Valentine's Day, many of Duggar's followers brought up the fact that she was wearing heels while pregnant — gasp — and the potential dangers of it — eye roll. One commenter wrote, "Heels during pregnancy? Really?" Others questioned whether the heels would impact her risks during pregnancy. Fast forward a few months, and she seems to be doing just fine.

Even before that, Duggar was getting flack on Vuolo's posts of her. Below is a photo from January when the two visited with Todd Friel, conservative radio host, fans commented about her belly. "Baby bump pic next?! Eh?! Eh?!" Another said, "Show us your belly!" But in this case, someone came to her defense, commenting:

Let the “baby bump” comments go. Leave it alone. Hopefully she will keep her pregnancy private and just between them. Just because her sisters crave the attention doesn’t mean she does! All fans want is for these girls to stay pregnant so they can have their weekly entertainment!

Duggar's post from April 6 accentuates her bump and that seemed to placate fans. Along with praising her growing bump, they tried to guess the sex of the baby based on her belly. "Definitely a girl!! Congrats!!" one of her followers wrote. Another was positive, "It's a boy!"

Psychic sex predictions aside, pregnant bodies don't all look the same and the fact that Duggar wasn't "showing" (as fans expressed) in one of her recent photos is uncalled for. Jessica Kiley, MD, associate professor of obstetrics and gynecology at Northwestern Feinberg School of Medicine told Health.com as much. “Women come in all different shapes and sizes, and carry differently depending on a number of factors," she said.

One of those factors is whether or not it's your first pregnancy. First-time moms often take longer to show, according to Kiley, because it can take longer for the uterus to move above the pelvis. With additional pregnancies, “the abdominal wall has greater laxity, allowing women to show sooner,” she told Health.com. As this is Duggar's first pregnancy, it's really not surprising that she wasn't showing as obviously until later — no matter what her fans may say.

Expectant mothers have enough to worry about without the added stress of how people perceive their pregnant bodies. Unfortunately, bump-shaming is all too common. In a recent survey, 94 percent of mothers-to-be reported being verbally abused over their pregnant body shape to Channel Mum. Additionally, the average mom was bump-shamed 10 times during pregnancy, but one in 20 expectant mothers report over 50 incidents. Strangers, friends, and work colleagues were the most common source of the shaming, but one in 10 of the women were criticized by her own mother and 5 percent by their mother-in-law, according to Channel Mum.

While it is understandable that fans want to follow Duggar's pregnancy journey and celebrate her milestones with her, it is never OK to make someone feel bad about the way that they look — pregnant or otherwise. Duggar and Vuolo have just under three months left until their little one makes his or her arrival, according to People, and I for one hope that she is able to enjoy this last bit of her pregnancy without the judgement and interference of prying eyes.