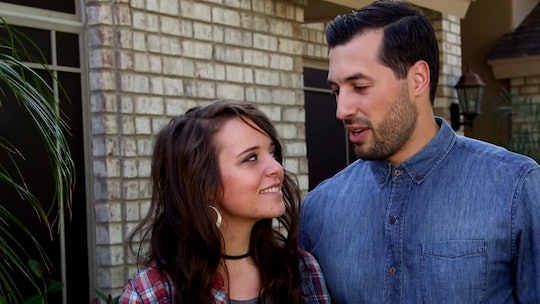 People Keep Making The Same Comment About Jinger Duggar's Bump In This Photo, & It's Not OK

When you've been on television for a good 10 years, you probably get used to having your every move and every photo scrutinized. But that doesn't make it OK and it's especially frustrating that Counting On star Jinger Duggar is getting bump-shamed in this recent photo with her husband, Jeremy Vuolo. Although these comments are coming from fans who are excited about Duggar's baby-to-be, the detective work looking for her pregnancy bump is really unnecessary.

Duggar and Vuolo announced that they're expecting their first child together at the beginning of the year. "Truly, the Lord’s mercies are new every morning! Now, the journey has taken an exciting turn: we are expecting our first child!" the couple wrote on their blog on Jan. 3. Since then, the mom-to-be has been pretty generous about sharing updates about her pregnancy on her Instagram and letting fans know how far along she is with adorable food comparisons to show how big their baby is now. (Right now her bundle of joy is rouughly the size of a papaya!)

Last weekend, though, the expectant parents had a quick getaway and made a pit-stop at the famous Magnolia Market in Waco, Texas. Vuolo shared a sweet photo of the two enjoying their visit. But, as many fans commented, the photo doesn't necessarily showcase Duggar's growing pregnancy bump, like her other bump photos have.

The photo Vuolo shared last week is definitely one of those cute couple posts, but instead of making sweet comments about how happy they look at Magnolia Market, many people started digging for more information about Duggar's bump. Even when fans were being perfectly lovely, some comments came off as a tad judgmental. "Cute! Where’s @jingervuolo's bump? She’s adorable!" one user wrote. Others were similar in their comments being both kind, yet intrusive. "Cute! No baby bump??" one wrote," and another added, "Must be old pic, don't see baby bump!"

Another simply asked, "Where is the baby bump??" Someone else wondered, "Did she have the baby already??" Other comments included "just wondering why there's no bump in the pic," and "Where is her baby bump?? Unless, this is an old photo.."

Fans are free to comment on the couple's photo and as they're both public figures, they likely expect their followers to chime in. But, that doesn't mean that people should be nosey about a woman's pregnancy body. After all, pregnancy is already a big change and comments that seem harmless like, "Jinger is so tiny that you cannot even tell that she is pregnant in this photo," as one user wrote, could actually be pretty damaging.

In fact, according to The Seleni Institute, a 2003 study from Johns Hopkins actually discovered that "21 percent of the women engaged in weight-restrictive behavior during their pregnancy and fasted before prenatal appointments" due to previous eating disorders and unwelcome comments on their bodies. Additionally, comments on the size of a woman's bump or her weight gain during pregnancy can actually be "detrimental to a pregnant woman," according to The Seleni Institute.

Although fans are perhaps looking a bit too much into Duggar's photos, she has shown off in previous photos that, she does, in fact, have a pregnancy bump. But, as some fans have criticized, it just isn't big enough.

Scientifically, though, a woman's pregnancy bump depends on a variety of factors and every woman carries their pregnancy differently. According to former midwife, Aly Dilks, who spoke to the Daily Mail about Kate Middleton's pregnancy bump with her third child after she also got shamed for the size of her bump (this seems to happen far too frequently), a woman's first pregnancy usually equates to a smaller bump. "During your first pregnancy the body uses hormones to make changes to accommodate the baby," she explained to the publication, adding, "As your rib cage widens and your uterus expands, it can take time to establish a real bump."

All the comments on Vuolo's photo of Duggar looking happy and healthy are uncalled for and totally unnecessary. Wondering, "Jinger doesn’t look pregnant here...??" as one fan commented, is insensitive and asking questions about a stranger's bump (even if she is a celebrity) is intrusive. The Arkansas native may be a reality TV star with more than 787,000 Instagram followers, but comments about the size of her bump really have got to go.