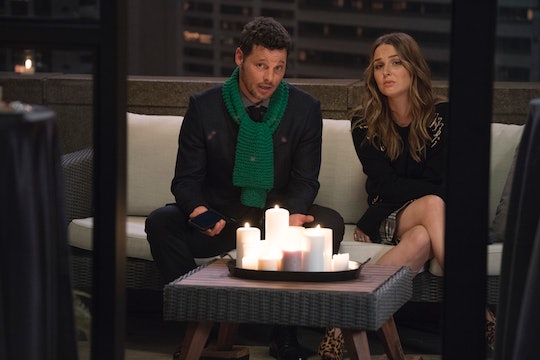 Jo & Alex's Marriage Could Be In Trouble On 'Grey's Anatomy'

Jo has been through a lot during the second half of this season on Grey's Anatomy. She left Seattle in search of her birth parents and a heartfelt reunion and came up short. Instead, she learned the truth about her conception and she came home feeling more defeated than ever. Now, Jo is on a downward spiral on Grey's Anatomy and fans are concerned. Not only are they worried about her, but after tonight's episode, they are also worried about the future of Jolex, a.k.a. Jo and Alex.

Alex and Jo were one of the strongest couples on the show and it honestly seemed like they could overcome anything. Now, Alex has no idea why his wife is pulling away from him and she is too traumatized from meeting her birth mother and learning that she was the product of rape to open up to him. And at the end of tonight's episode, they had a fight that ended in some uncertainty about their future.

Alex threatened to fly across the country himself and find out what happened to Jo when she met her mom and Jo, in turn, threatened to leave him if he ever actually did that. After going through everything they have endured as a couple, the future of Jolex seems pretty unclear.

Some Grey’s Anatomy fans wish that Jo could just open up to him, of all people. Alex had a terrible childhood himself and until now, they found it easy to bond over their shared childhood traumas. On the one hand, Alex has no idea what Jo is going through so he can't yet comprehend how she is struggling. But on the other side of the coin, Jo just learned something major about her birth parents and that has to be difficult to properly process alone.

Other fans feel sorry for Alex. Earlier in tonight’s episode, he confided in Meredith about worrying that another woman would leave him. He mentioned all of the women who were somehow hurt or damaged by something else and left Alex instead of coping with it with him by their side. It was pretty heartbreaking.

It’s kind of hard not to shout at Jo from my couch and yell at her to just tell Alex what happened when she met her mother a few episodes ago. Alex might be able to help her work through what she had learned and he clearly wants to be there for her. He just doesn't know how and soon, his concern is going to turn to frustration and resentment.

Jo deserves to take all the time she needs to process what her mom told her about the rape that resulted in her conception and how she had to leave Jo at a fire station when she was just days old. It was a traumatic thing to learn when Jo expected her mom to want to know her rather than turn her away. Unfortunately, Alex can't even begin to guess what happened to Jo, so from his side, all he sees is his wife pulling away and not opening up to him.

Jo told Alex to give her time to tell him what happened, but Alex is a little too insecure to be able to give her much more time than he already has. As he pointed out, he never had good luck with women and to him, it looks like his luck is running out with Jo. It’s so sad to see, especially because Jo needs someone to talk to but can't bring herself to deal with it yet.

From taking an extended leave from work to showing up at work drunk with a bottle of vodka disguised in her water bottle, Jo is slowly going off the deep end on Grey’s Anatomy. She has all of the tools in front of her to get help but if she’s not ready yet, no one can force her. And so far, a few have already tried. If she can't bring herself to try and open up to Alex at least a little bit, they might be in serious trouble.