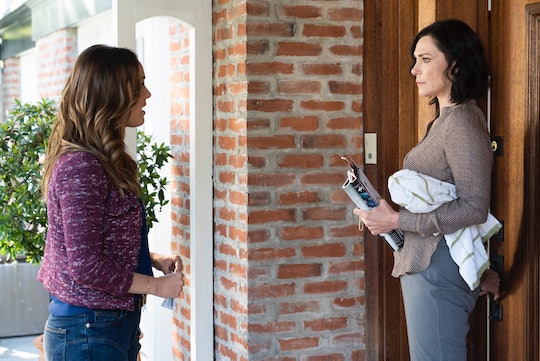 Jo's Mom Could Be Hiding Something Big On 'Grey's Anatomy'

Grey's Anatomy has never shied away from hot topics or epic mid-season finales. But the preview for tonight's episode promised something that the show has never covered before and it likely has to do with Jo and her birth mom. So what happened to Jo's mom on Grey's Anatomy? The cryptic trailer for tonight’s episode doesn't say much other than the fact that the episode has "sensitive subject matter" and that it will focus on Jo’s meeting with her birth mom, who she only found out last episode existed. We already know it didn't go very well by the way she had been crying in bed when Alex came home from the hospital last week. But obviously something much bigger than getting turned down by her birth mom happened and fans have some theories.

It’s very rare that Grey’s slaps that "viewer discretion" label on an episode, especially given all of the mature content that has been covered on the show over the years. But it likely means that they are going to tackle something serious and potentially life changing tonight and whatever it is, Jo’s mom seems to be impacted by it the most.

One fan on Twitter thinks it might have something to do with Jo’s family medical history. Since part of Jo's reason for seeking out her birth mom was to know if there is any history of serious illnesses in their family, there could be a chance that she has a condition that has been dormant until now. Or maybe Jo’s birth mom is already dying and that makes their reunion a little harder than it already is.

Another fan wrote that Jo could find out that her birth father committed suicide and that she is crying so much in the preview because this means she will never get to meet him. It doesn't look like anyone but Jo and her birth mom are meeting in tonight's episode, so that could have some weight to it.

Someone else tweeted that Jo’s mom might have been raped, which resulted in her pregnancy with Jo and that was why she left Jo at a fire station when she was a couple of weeks old. In the preview, both Jo and her birth mom seem very emotional during their talk and I don’t think it’s just because her birth mom is feeling guilty about the struggles Jo went through without her. This could be the answer and it would make sense why there were multiple warnings before tonight’s episode.

According to The Hollywood Reporter, tonight’s episode does deal with consent and showrunner and executive producer Krista Vernoff said at the recent Day of Unreasonable Conversation panel, that it is "the most powerful hour of TV I've ever been a part of." Like other important storylines this season which dealt with the real life opioid epidemic, Vernoff said it is important to her to be able to tackle important issues on the show.

"I am not fearless, but I am f*cking brave," she said. "I have so much fear when I challenge the status quo. And I shake and I cry and I call people and then I do it anyway."

Jo’s birth mom could have been a sexual assault victim, making Jo the product of rape, which would definitely make her mom feel disconnected from her and, in turn, cause Jo to have an identity crisis of her own. It explains why she was upset when she came back home last week, but if that is what happened to her mom, then Jo might need some time to deal with it on her own.