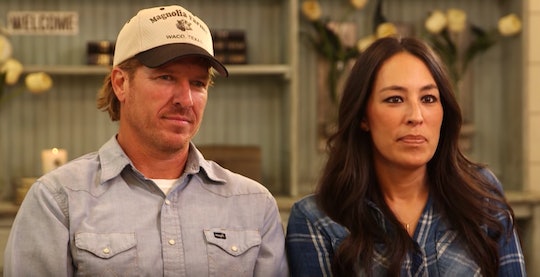 Chip and Joanna Gaines, the former stars of HGTV's Fixer Upper and overall life and design gurus know how to celebrate. And after welcoming their fifth child together, son Crew, earlier this year, they have a lot to celebrate. So, it shouldn't come as a surprise to anyone that Joanna Gaines documented son Crew's first Thanksgiving and showed that her holiday celebrations will always be just a bit better than yours.

Joanna gave birth to her fifth child in June, according to People, but that doesn't make the holidays with her newborn any less exciting. Sure, she might have experienced her first holidays with her kids so many years ago, but this year, she is looking through the holiday season with a new set of eyes. The mom to four other kids ranging in age from their teens (yes, she is the mom of a teenager) to eight years old, made Thanksgiving super special this year thanks to Crew's addition to the dinner table. And on Thursday, Joanna documented this celebration on Instagram.

How could she not be thankful with a family as cute as hers?

And over on her Instagram Story, Joanna detailed her celebration even further. Although the Texas creator is pretty traditional when it comes to her designs, the Gaines' Thanksgiving meal veered off course from tradition. Joanna documented her Lebanese Thanksgiving feast, opting for dishes like grape leaves and cabbage rolls over turkey and mashed potatoes.

Although it might have seemed like an eclectic meal to some people, her photos of the feast (which she said was cooked by her mom) looked incredible.

But Joanna's Thanksgiving meal wasn't super out of the ordinary — it paid tribute to her family's heritage. Although Joanna was born in Oklahoma, according to Country Living, her dad is Lebanese and German and her mom is Korean. With this unique Thanksgiving meal, Joanna is both teaching her kids about their ancestry and to be thankful for the people and cultures that blended together to bring them together.

Considering that eating turkey and corn every year gets a bit boring, it looks like Joanna and her family were so happy to chow down on some different traditional foods this year. But you would be, too, if you had a meal like theirs.

But this isn't to say that Joanna and her family do this every year. In the past, Joanna has been open about loving Thanksgiving (including turkey) — she's even given people tips about how to host the holiday and have hosted their own Thanksgiving meals "potluck style." And in 2016, the couple hosted a pre-Thanksgiving "Friendsgiving" with their friends in a barn, according to People. Not to mention, so many people rely on her tips for hosting the perfect Thanksgiving feast and decorating the table year after year, as reported by Motherly. Needless to say, the couple knows how to have a Thanksgiving meal.

And when Joanna and her family aren't having a traditional Lebanese feast for Thanksgiving, they have plenty of recipes to rely on. Joanna's homemade stuffing is famous, according to Southern Living, because it's a complimentary savory dish to the Thanksgiving spread.

Although is looks like the Gaines family loved their Thanksgiving meal this year, Crew seemed to have celebrated the hardest. Joanna posted the sweetest photo of Crew sound asleep and embracing his baby blanket for the first time on her Instagram story. Crew is already learning that Thanksgiving will do that to you.

Crew's first Thanksgiving doesn't get any sweeter than this. Although he might not have had a taste of turkey and green bean casserole, he will learn how special this holiday is soon enough. And this year, the little boy got to celebrate the holiday in a super special way.