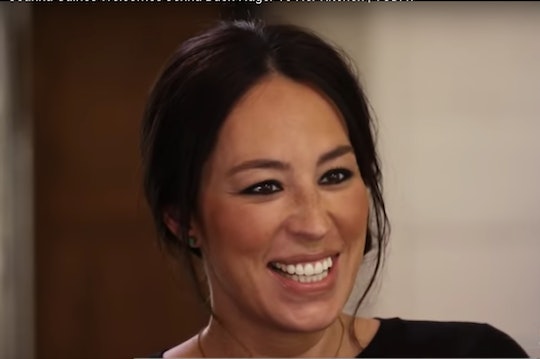 Though he may only be one week old, the youngest member of the Gaines family is already one of social media's biggest stars. Of course, he's not walking or talking just yet, but fans of the Fixer Upper stars have been utterly blessed with several adorable photos of the little man since his arrival. And now, Joanna Gaines' new photo of baby Crew features not only the adorable baby, but it also gives fans a peek inside his totally classic and tasteful nursery. Not that anyone should really be surprised by that, though.

As anyone who has ever seen Fixer Upper or heard of Gaines knows, the woman has style. Whether she's showing couples their possible dream home, restructuring spaces to better fit their needs, or putting the finishing design touches on their newly remodeled home, Gaines always looks great, and her design style is always on point. So, the fact that the little glimpse she gave fans into her baby boy's nursery was just so her isn't at all surprising. There's a reason the modern farmhouse look is all over your Pinterest, and Gaines is a big reason for that.

So, if you're expecting a little man and don't know where to start with the nursery, then just allow Gaines to be your inspiration. After all, she knows what she's doing.

Gaines posted the above photo on Saturday, along with the caption, "It's been a little over a week and he's settling in just fine." Now, if you don't recall, Gaines gave birth to baby Crew on June 21 and shared an adorable photo of the newborn to her Instagram page, informing fans that he had been born a little early. Gaines wrote:

Our baby boy, Crew Gaines, is here and we couldn’t be more in love. He made an unexpected (and speedy) entrance into the world two and a half weeks early - which is fitting given he was a sweet surprise from day one. Thank you for all your thoughts and prayers. We are so grateful.

Ever since then, Gaines has been pretty generous with photos and sharing update about life with baby Crew and as a mom of five.

What's extra fun about her latest photo is that you get to see the baby swaddled up in a very sleek and cool rocker as well as baby Crew's crib and changing table.

From how it looks in the photo, Crew's crib appears to be black iron, with white and tan bedding and a gray blanket was thrown over the side. And his changing table is a gorgeous wooden dresser. The nursery also features a sleek white rug and a gorgeous tall plant in the corner by the window. Basically, if you're familiar with Gaines' style at all, her nursery is exactly what you'd expect.

Baby Crew isn't the only one settling in nicely into his new life. While both Chip and Joanna aren't exactly new to parenting, as Crew is their fifth child, it's been eight years since they had a newborn at home. And as Gaines herself explained, life with a baby after a lengthy break takes some adjusting and getting used to. And as the mom of five told People, baby Crew is the best addition to her family that she could ask for.

"I think it's sweet because they're older now," Gaines said of her four older children, 13-year-old Drake, 10-year-old Duke, 11-year-old Ella, and 8-year-old Emmie Kay. "And I can see them wanting to be a part of this. We're all rallying around this baby, which I feel is a sweet gift to our family."

Between baby Crew's perfect nursery, his cuddly personality, and how much his older siblings already love him, it's obvious that the Gaines family is one happy party of seven now.