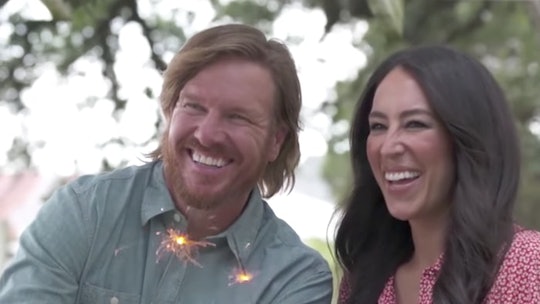 Chip and Joanna Gaines are in the business of making life more beautiful. If you've ever watched Fixer Upper on HGTV, you're already hooked on their distinctive style. Part whimsical, part cozy chic, and all crave-worthy. For fans who love the designer couple's style, there's some good news on the horizon. Chip and Joanna Gaines' new Magnolia line is about to become available at Target. Yes, Target, because dreams really do come true.

According to a recent post from Joanna's Instagram feed, the couple has designed a new line for their trademark Magnolia brand specifically for Target. The line, which will be called "Hearth & Hand," will be available on Nov. 5 in stores and online, so book the day off work now, folks. The mother of four shared on Instagram:

For a while now, we’ve been working on a project that’s really meaningful to us and we are so excited to share the news with you! Hearth & Hand with Magnolia will be available at Target November 5th.

The new line will feature over 300 items, and just in case you weren't excited enough, Joanna has referred to the style of the new line as "modern farmhouse," according to a blog post by Chip. And that just sounds amazing.

Chip explained in his blog post that the concept will be something new for Target as well:

Let me try to give you a visual. It's like a little shop inside of Target. Jo keeps calling the look "modern farmhouse," whatever that means. All I know is she's so excited about this collection that she wants to register for our wedding all over again.

Fixer Upper fans will be losing their minds over this news, of course. I mean, it won't be quite as amazing as visiting their flagship Magnolia Market store in Waco, Texas (where Joanna's mom actually greets guests and will even reportedly pose for pictures if you ask), but it will be about as close as you can get in your hometown.

This is the first time the couple has partnered with a major retailer, according to a press release by Target on Tuesday. And it's meant to be a long-term relationship (is there any other kind for the adorable couple?). According to the press release:

It’s not a limited time collab—this partnership will last multiple years, and will refresh season after season, bringing Target’s guests stylish home goods on an ongoing basis. The first collection arrives on Nov. 5, just in time for holiday gatherings. The collection reflects a modern take on Magnolia’s signature aesthetic with modern, classic, industrial and vintage touches. And in true Target style, most of the items are under $30.

Target also shared a sneak peek of what the Gaines have in store... and everything is obviously exactly what you want right this minute.

Magnolia fans are probably not going to make it all the way until November.

In recent weeks, the Chip and Joanna have been working to help victims of Hurricane Harvey in their home state of Texas. In an Instagram post from their Magnolia page, they wrote that they would offer 100 percent of the proceeds from their "Texas Forever" t-shirts to help restore "homes and lives" in Texas.

Texas - we will always have your back. From now until the end of September, 100% of the proceeds from our "Texas Forever" shirts will go toward restoring homes and lives in the wake of Hurricane Harvey. This undertaking is not too big for us if we are all in.

As with everything Chip and Joanna, the response has been overwhelming. So it's a safe bet that it will be with their new line at Target. Now if they could just patent some marriage tips and send them my way... I'd be ever so grateful.