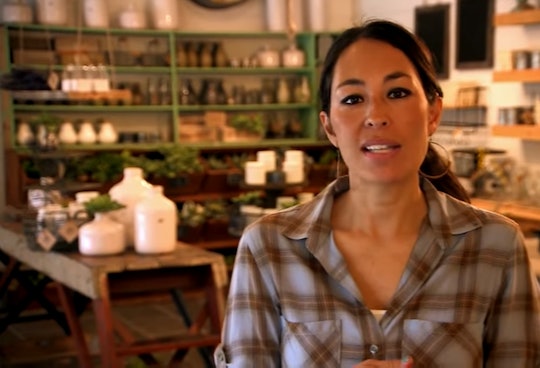 Joanna Gaines' Quotes About Her Kids Will Make Moms Admire Her

No one can deny that parenthood is hard, especially if you spend most of your time in the spotlight. You have to juggle the demands of your family and the demands of a fickle entertainment industry. For Fixer Upper co-hosts Joanna and Chip Gaines, that means keeping their family life and their television show separate. Just consider some of Joanna Gaines' quotes about her kids. The HGTV design star, who's working on a new design book, is a down-to-earth mom who wants her children to enjoy every part of growing up.

The Gaineses have always been open about wanting to keep their four kids — Emmie, 6, Duke, 8, Ella, 9, and Drake, 11 — away from television cameras. Joanna Gaines has said to reporters in the past that the decision to not have their children as part of Fixer Upper is intentional. She told Wacoan magazine during a 2014 interview,

I just don’t think they’re able to take in the amount, the weight of it. There’s a lot of weight when you’re watched on national television. ... Right now while they’re young, we want to protect them from all this.

Here are some other quotes from Gaines that show the design guru is grounded and wants nothing but the best for her children.

On Protecting Your Young

I could imagine that growing up in front of camera is no picnic. And it seems Gaines does too. That's why her kids are oblivious to Fixer Upper, even though they know that's what their parents do for a living. She told People in October,

They’re so young and we want to give them the chance to have a normal childhood. So they don’t really understand that we have a show. They don't get it.

On Making Your House A Home

You all know the old adage: Home is where the heart is. For Gaines, those are words to live by. She told Wacoan in 2014,

[A]s a mom, I want my home to feel like home. More than I want it to be beautiful, I want my kids to just love being home. I want them to settle well there.

On Experiencing The World Around You

I won't lie: I'm glued to my smartphone 24/7. Well, not that often, but enough that I sometimes miss the little things when I'm with my family. That's why Chip and Joanna have made a conscious decision to limit their kids' use of technology. Joanna Gaines told Entertainment Tonight in October,

I tell the kids that you are probably not going to get a cell phone. We want to teach our kids that life happens outside of these devices. It's just a simple thing to go outside and connect with nature, play with your friends and get dirty.

On Setting An Example

As a working parent myself, I understand how difficult it can be to separate yourself from your kid. But it's important for your children to see you living your passion, because it will teach them to follow their dreams when they're older. Gaines wrote on her blog last year,

As a working mom, it’s the hardest when my kids grab onto me as I’m walking out the door and say, “Mommy please stay home!” I don’t want to ignore that, so I always explain to them that being with them is my favorite thing in the world. I explain that I have to work just like they have to go to school. ... Taking a few seconds to let them in on this other huge part of my life has really helped them understand that mom and dad have a big job to do.

It's clear Gaines wants her kids to have a stress-free childhood. That's why she has chosen to shield them from the spotlight. But equally important is making sure her home is warm, inviting, and comfortable for her kids. Because that's where you make your best memories.

More Like This
25 Great TV Shows About School To Watch As A Family
'Virgin River' Fans Can't Stop Cracking Jokes About How Charmaine Is *Still* Pregnant
Anne Heche Remembered As "Loving Mother" To Her Two Sons After Her Death At 53
Dan Levy Just Proved He's The Ultimate Uncle With This Perfect, Sweet Answer