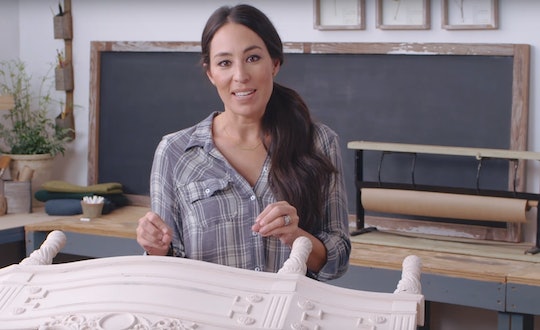 Everyone loves to indulge in a slice of chocolate cake or a tasty pastry every once in a while. But when you've got a bun in the oven... you can really appreciate those guilty pleasures when a craving strikes. For example, Joanna Gaines posted a photo of her growing bump on her birthday today, April 19, and showed that she's totally owning her pregnancy cravings for all they’re worth.

The former Fixer Upper star turned 40 today and celebrated in pregnant style with an Instagram photo captioned, "This is 40. And I like it…#pregnantandforty #anddoughnuts." A full pate of doughnuts can be seen on the the table while Joanna is clearly loving the heck out of the one in her mouth. Joanna is nearing her third trimester of pregnancy with her fifth child, who is thought to be due in July, according to Country Living.

Though the couple hasn’t officially announced the due date, a few months back, Joanna's husband, Chip Gaines, posted a tweet that indicated the baby might have been conceived in September after what he called a “too romantic” concert by the folk pop band Johnnyswim. “You might recall a few months back.. the ever amazing, ever romantic @JOHNNYSWIM was in Waco. And they put on a little too romantic of a concert.. anyways, one thing led to another, & we are officially pregnant,” Chip posted on his Twitter account.

Whenever baby number five is actually due, Joanna looks healthy and so happy in today’s photo — in comfy clothes, bare feet, and surrounded by her signature homey décor. And her fans are absolutely loving her birthday post.

"Happy birthday mama!! 40 + donuts sounds like a match made in heaven! And that bump is too cute❤😊," one commenter wrote. "Happy happy birthday to you!!! You’ve been an inspiration to so many for so many reasons!” another chimed in.

Chip, though, was not to be outdone by his adorable wife on her birthday. He took to his Twitter account to give her the cutest and kindest gift, urging people to help her get to 1 million followers today. He also said that for every new follower, he’ll donate $1 to St. Jude’s Children’s Hospital. Joanna currently has 997,000 followers now, so the hospital stands to gain at least $3,000 if people come through. But, knowing the Gaines’ kind hearts though, I have to think that Chip will be there with a nice donation regardless of where Joanna’s account winds up today.

His kindness is even inspiring some people to donate on their own. “I am already following you both but I will go to @StJude and donate. Your fans love you guys.” one person wrote.

It shouldn't be hard for Joanna to get to that 1 million mark since she is so well loved. She hasn't made a big deal about her pregnancy on social media, preferring to keep the focus on her designs and the end Fixer Upper. But neither has she been reticent to share her growing bump. In February, for example, she shared a gorgeous photo saying that she was headed out to a photoshoot and there was "no hiding this baby bump anymore."

Just a few weeks later, fans caught a glimpse of it again in a candid photo at an event for her new magazine venture Magnolia Journal.

Even though fans were totally bummed when Chip and Joanna recently ended their super-successful show Fixer Upper, they're not disappearing from TV altogether. Instead, they've launched another show on HGTV called Behind the Design, which looks into the process of creating the country chic style that the couple has made famous. And fans certainly appreciate Joanna's sweet pregnancy updates.

At any stage in her pregnancy, Joanna's gorgeous smile is a joy to behold. Here’s to the enjoyment of a good doughnut, and the peace of embracing 40 that is written all over her expression. Happy birthday to this wonder woman!