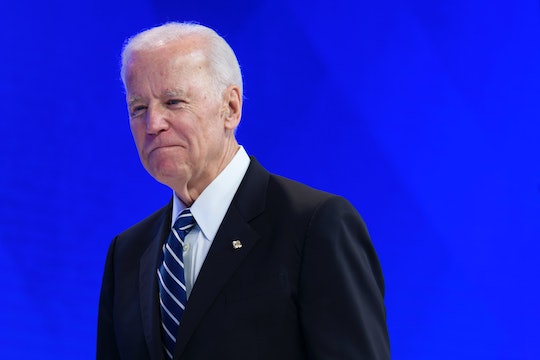 Joe Biden Had The Best Reaction To Trump's Charlottesville Response

Earlier this month, President Donald Trump compared white supremacist demonstrators to counter-protesters who fought back against their recent racist, violent demonstration in Charlottesville, Virginia. The backlash, of course, was swift, intense, and widespread. Now, the former vice president (who served under the United States' first back president) has added his voice to the condemnation. And, just as you'd expect, Joe Biden's response to Trump's Charlottesville reaction is a must-read — because it's essential that Americans confront the awful history of racism and oppression here in order to embrace a better, more equitable future.

In an op-ed published in The Atlantic Sunday, President Barack Obama's former No. 2 guy wrote that "we are living through a battle for the soul of this nation." And those words certainly ring true so soon after Trump had the audacity to refer to gun-toting white supremacists whose ranks included a man who murdered a women and others who brutally beat a black man as merely "a group on one side that was bad." In the same breath during that public appearance, Trump called those out to fight against the bigotry as "a group on the other side that was also very violent."

So, you can see why this caused members of his now-dissolved business advisory councils to quit and for even Republican leaders like Florida Sen. Marco Rubio to call out Trump by name.

And for Biden, it came as no surprise that white supremacists would feel emboldened to rally as they did in Charlottesville, considering what Trump has done to legitimize their cause. So, it's as important now as ever before for the American people to stand up against the hatred that permeates so much of our public life, as Biden wrote:

This is a moment for this nation to declare what the president can’t with any clarity, consistency, or conviction: There is no place for these hate groups in America. Hatred of blacks, Jews, immigrants—all who are seen as "the other"—won’t be accepted or tolerated or given safe harbor anywhere in this nation.

Ever the believer in the country he loves and has served for so long, Biden praised those who have already begun to do just that — from charitable organizations to faith leaders to "that small group of University of Virginia students who stared down the mob and its torches on that Friday night."

This isn't the first time that Biden has spoken out about his disapproval of Trump's policy objectives and behavior. In July, as Republicans pushed to pass legislation to dismantle the Affordable Care Act, Biden wrote in a Washington Post op-ed that the government must "come to an agreement that everyone should have health coverage" and go from there. The Republicans' plan would not have met that standard, and it ultimately failed soon after the publication of Biden's op-ed.

Clearly, Biden believes that those standing up to white supremacists can win this fight, too. Toward the end of his piece, he included a call to action:

With the eloquent guidance of people like Biden, it really seems possible.