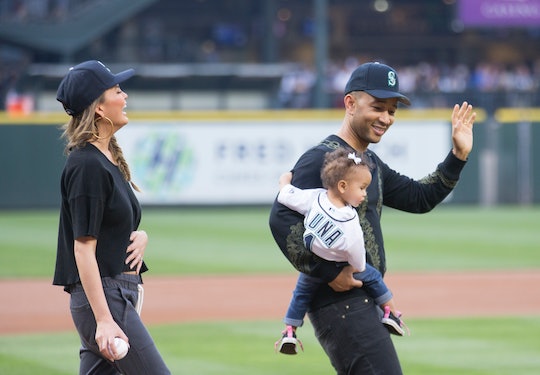 Why John Legend Isn’t Raising His Daughter With Toxic Masculinity

It's a scene from a movie, or your friend's house, or your own front door — a boy comes a-calling to pick up his girlfriend. The frowning father meets him at the door, ready to threaten him if he dares to touch his little girl. The daughter comes racing to the door with an eye roll and an Ivanka Trump-level "Oh, daddy!" Laugh track ensues. And an archaic picture of the ideal father was somehow born. Except no longer, if John Legend has anything to do with it. As he recently explained, Legend isn't raising his daughter with toxic masculinity, perhaps because the notion that a young woman isn't intelligent or confident enough to choose for herself is slightly outdated.

The Grammy-winning "Love Me Now" singer opened up to People recently about his beloved 17-month-old daughter Luna with wife, model and cookbook author Chrissy Teigen. It seems he and Teigen have already talked about the future of Luna dating, and they've come up with a solid plan; raise her right and trust that she'll do right. He told People:

We’re going to just try to make her confident and smart and a good leader and kind and loving, and we feel like if we give her all the tools she needs, she’ll figure out the right person for her.

So, what? No jokes about rules for dating my daughter? No preconceived ideas that all boys are sex fiends and all girls must be kept hidden until they come of age? How novel. Legend continued to tell People:

I don’t like the idea of treating our girls differently than we treat our boys, saying "Boys, go out there and have as much sex as you want, do whatever you want" and then our girls have to be locked in a convent. I don’t believe in that. I just want to equip her to make the best decisions.

Toxic masculinity — which is described as negative behavioral norms in men like aggression, devaluing women, and suppressed emotional output, psychologist Terry Real told Salon — is actually a subject near and dear to Legend's heart. He has teamed with Axe to mentor teenagers as the face of their new Find Your Magic Initiative and Senior Orientation program to promote inclusive masculinity. While there was a time when he admitted he lived in a world seemingly dominated by toxic masculinity as a musician, he credits his family with helping him broaden his horizons. He told People:

[Marriage] helps you develop more empathy. Part of being a good husband and father is being able to listen, be humble and compromise. It’s not about dominance and power. You learn as you get older, the best relationships are about give and take.

Legend isn't just spouting platitudes either; when wife Teigen recently decided to stop drinking, he was at her side to support her as a devoted husband. Because he believes that being a good partner should be "cool." As he told Cosmopolitan:

I don't mind being known as somebody who's devoted to their wife. I am devoted to Chrissy. And when I write about [my commitment to her], it's me being authentic. I think it should be cool to be a good partner, a good spouse, a good father, and/or a good parent. If I'm one of the people who helps make that cooler, I think that's great.

He's right, of course; showing the world (and especially young men) that he loves his wife, loves his daughter, and still manages to be a cool guy is probably one of the best things Legend can do to combat toxic masculinity in the next generation — because, seriously, it is getting really old.