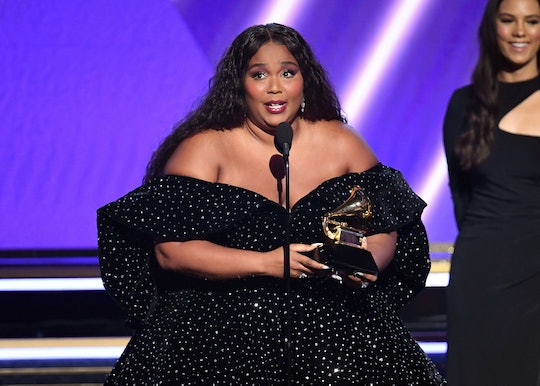 On Sunday night, Lizzo won her very first Grammy award and I can't tell you who looked more excited, her on stage ... or Chrissy Teigen's other half in the audience. Truly, John Legend looked at Lizzo winning a Grammy like the proudest of dads, because I guess Alicia Keys was right and music really does bring everyone together.

The "Good As Hell" singer won the first Grammy of the evening after opening the show with two amazing performances that she dedicated to NBA player Kobe Bryant. Bryant tragically died earlier on Sunday alongside his 13-year-old daughter Gianna in a helicopter crash, which naturally cast an emotional pall over the award show. It was a lovely way for Lizzo to honor his memory, and moments later she took the stage again for a seriously exciting reason.

Lizzo won Best Solo Pop Performance for "Truth Hurts," and in true Lizzo fashion, she didn't even try to hide her excitement. As the names of the nominees were called out, Lizzo was pictured backstage crossing her fingers with her eyes closed. And when she won, she ran out on stage to collect her award... much to the delight of everyone in the crowd but most especially John Legend.

Legend, sitting beside his wife and the Mayor of Twitter Chrissy Teigen, was leaning forward in his seat with one of those dad smiles he usually reserves for his 3-year-old daughter Luna and 1-year-old son Miles.

People's Sexiest Man Alive could not hold back the collective pride all Lizzo fans felt seeing her take the stage and delivering an empowering speech about the power of "lifting each other up."

"You guys create beautiful music. You guys create connectivity and as I'm speaking to all of y'all in this room, we need to continue to reach out," she said. "This is the beginning of making music that moves people again. making music that feels really f--king good, that liberates people. Let's continue to reach out. Hold each other down and lift each other up."

Legend's reaction to Lizzo's success at the Grammys is such a perfect example of the importance of lifting each other up. Supporting talented musicians and making sure they see you celebrate them.

Because there's enough room for all of the John Legends and Lizzos we can get in this world. And now I just really hope they're hanging out after the show together.