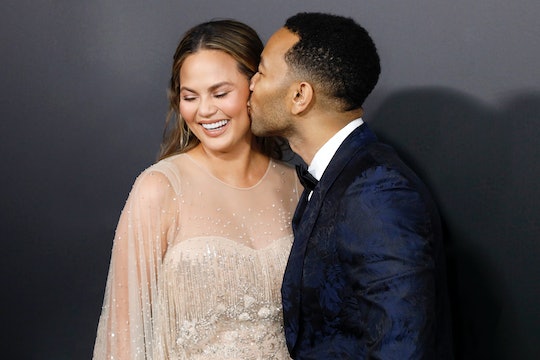 While John Legend's life with Chrissy Teigen and their two adorable children may seem idyllic, the two have experienced a few bumps along the way, including struggles with fertility and life after childbirth. And in a candid interview with People, Legend shared that Teigen's postpartum depression affected their relationship as husband and wife, but not how you might think. The newly-crowned "Sexiest Man Alive" opened up about how supporting Teigen through her postpartum depression showed him new sides of his wife and ultimately served to strengthen their relationship.

"I think it shows you another level of love when you become a father, and it's not just for your kids," Legend recently told People of parenthood. "I think it deepens your love for your partner a lot of times too because you see them in a different light going through, in our case, the trouble of actually having a kid."

Since becoming parents to their daughter Luna in 2016 and son Miles in 2018, Legend and Teigen have been open about their struggles to conceive and experience with fertility treatments, including in vitro fertilization (IVF). "Emotionally, it could be really hard," Teigen told Self in March 2016 of the regimen of pills, shots, and doctor visits she underwent to get pregnant with Luna. "When you have these high-highs and low-lows, and you're, like, cuckoo pants."

But it wasn't just their struggle to conceive that changed the couple's relationship. Legend shared that Teigen's postpartum depression also had an impact on the duo. "Then Chrissy's going through postpartum depression," Legend told People. "You just see different sides of that person, and if you go through it and you learn from it and you come out the other end better for it, then it deepens and strengthens your relationship."

Teigen first opened up about her experience with postpartum depression in an essay she penned for Glamour in March 2017. "I had everything I needed to be happy. And yet, for much of the last year, I felt unhappy," Teigen wrote of her struggles after Luna was born. The model and television host noted she kept the shades in her house closed, spent days and nights on the couch, and started keeping robes and other comfy clothing in her kitchen pantry as she never had the energy to walk upstairs to her bedroom. "There was a lot of spontaneous crying," she wrote.

Shortly after Teigen's essay for Glamour was published, Legend told Vanity Fair that he was "so proud" of his wife for writing about her struggles. "It takes a lot of courage and she really is amazing for doing that," he said. Legend went on to admit that Teigen's postpartum depression had "really scared" him because he didn't know exactly what she was feeling or how he could help her.

"All I knew was that it was my job to do everything I could to help her and try to understand what she was going through," Vanity Fair reported Legend said. "It's about being compassionate and supporting her, and telling her no matter what, I am going to be there for her and that I love her."