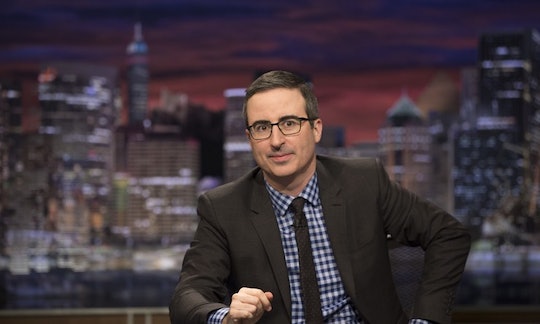 The research team at Last Week Tonight can barely get a deep-dive reported piece in anymore with the breakneck pace of the White House coverage they need to cover since Trump took office. This Sunday, John Oliver discussed a possible Trump impeachment on Last Week Tonight, weighing the likelihood of it actually happening against who would replace the president if he was impeached. And even if Mike Pence went down with Trump, the presidential line of succession looks grim.

It was a rough week for the White House — inexplicably, somehow worse than last week — and Trump surrogates are starting to disappear (into bushes, curtains, and probably more). As Oliver pointed out, Charlie Rose announced that CBS This Morning had invited 20 Republicans to the show last week to defend Trump and all of them declined. Congressman Justin Amash from Michigan's Third District was reportedly the first Republican to suggest Trump's actions merit impeachment, only for another Republican congressman from Florida to come forward trying to take credit for having the idea first. White House lawyers also reportedly started looking into how to handle a potential impeachment this week. But Oliver swiftly reminded us how terribly that could go by laying out the hypothetical line of succession.

First, there's obviously Mike Pence, whose favorite personal facts are being "a Christian, a conservative, and a Republican, in that order." Oliver noted that before he was vice president, he led efforts to defund Planned Parenthood, opposed the Lily Ledbetter Act, opposed the repeal of Don't Ask Don't Tell, championed a constitutional amendment defining marriage as being between a man and a woman, and passed the controversial Religious Freedom Restoration Act in his home state of Indiana, effectively legalizing discrimination against LGBTQ people on religious grounds.

If Pence goes down in an impeachment scandal, too, though, then we're left with Paul Ryan, who has yet to condemn any of Trump's behavior and was adamant last election cycle about not wanting to be president. And if not Ryan, then the job goes to Orrin Hatch, "a man," joked Oliver, "whose every expression says, 'I take fiber supplements, and frankly, they're not working.'"

Thanks to a Republican-controlled House and Senate, however, impeachment is likely to be a long shot. Basically, we just have to strap in for this volume of chaotic news every week for the foreseeable future. Oliver said, in conclusion:

No matter what, we are in for an agonizingly long period of leaks, allegations, and recriminations, all over a presidential campaign to put a man in power who may not entirely want to be there. Say what you want about Nixon; at least he wanted the f*cking job.