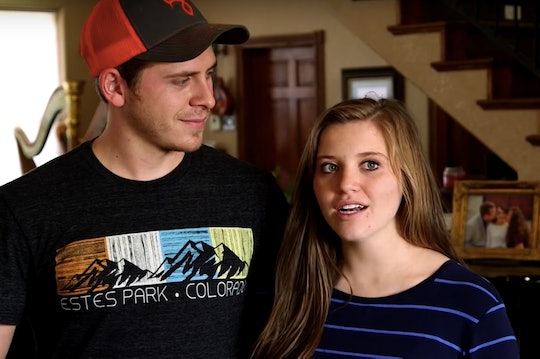 The Duggar family expanded even more last week after Joy-Anna Duggar and Austin Forsyth shared the news that they had welcomed their first child together, a baby boy. Now, Joy-Anna Duggar has opened up about her first days with her new baby and what it's like being a mom so far. It may have only been days since she gave birth to her little guy, but it's already clear that she's totally adapting to her life as a mom.

In a video released to the TLC website, as reported by OK! Magazine, Joy-Anna and Austin introduced their son, Gideon Martyn Forsyth. Duggar fans had been anxiously awaiting the arrival of baby Forsyth ever since Joy-Anna first announced that she was pregnant on Aug. 20, 2017, with an adorably sweet Instagram post. "Even before we were married we prayed that God would give us children and we are so blessed that he has given us this baby!" she wrote on the couple's joint Instagram account at the time.

The 20-year-old reality star is now a mom and Joy-Anna's comments about her first few days of motherhood following Gideon's birth on Feb. 23 are oh so relatable and after hearing them, most parents will think to themselves, "yup, been there."

In the video released exclusively to the TLC website, Joy-Anna explained that in his first few days on this earth, baby Gideon has definitely kept his parents up at night:

As most parents know, babies tend to not want to follow normal sleep schedules, so Joy-Anna's experience with baby Gideon's own schedule are just what happens with newborns. Sure, nothing totally prepares you for motherhood until it officially happens, but growing up with her siblings on 19 Kids & Counting probably gave her a good idea of what it's like.

Austin also explained in the video why they chose the name Gideon Martyn for their firstborn. "We chose Gideon because it’s a strong biblical name and the character in the bible was someone who was willing to follow the Lord, and he was a strong leader," the new father explained. "And Martyn is my middle name, and it was my granddad’s on my mother’s side middle name, so, we just thought our firstborn should have my middle name."

Clearly, the 24-year-old new dad is excited to have a little buddy to hang out with, something Joy-Anna also spoke about in the new video. "I think Austin's really excited to have a baby boy because he's been wanting to have someone to take to work and to go do a lot of different hobbies and to teach him all the skills that Austin knows," she said.

As for Joy-Anna? Well, she seems to be loving this moment in their lives and soaking up every bit of it. "And I'm excited because, I don't know ... he's just our baby," she said in the TLC video.

Of course, Joy-Anna also tried to explain just how inexplainable it was to be a new mom. "I think being first-time parents is really indescribable. I think everybody that has a baby goes through this feeling of just being so proud and so thankful to have a little one," she said, according to The Hollywood Gossip.

Honestly, Joy-Anna isn't alone in feeling a little overwhelmed with emotion by her little one. New motherhood is an interesting place, but it's clear that it's exactly where she belongs. In fact, Joy-Anna has pretty much always loved babies, something that is seen in all her quotes about becoming a mom. And it seems as though Joy-Anna and Austin are leaving it all up to God when it comes to how many kids they'd like to have. "We want as many as the Lord thinks we can handle," she told People after her wedding. "...we are putting it into his hands."

Who knows when the new parents will decide to expand their brood, but for now, it seems that Joy-Anna and Austin are enjoying parenthood one day at a time and loving every moment with baby Gideon.