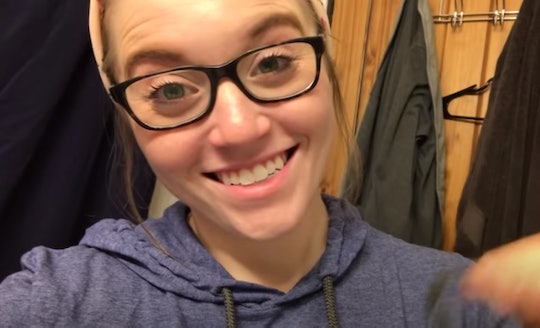 If you wanted to know what life with a toddler is like, please look no further than Joy-Anna Duggar's photo of her son Gideon that perfectly captures the messy chaos in an nutshell. The Counting On star, who is currently expecting a daughter with her husband Austin Forsyth and is due to give birth this summer, recently gave her followers a look at how her toddler is keeping himself and her busy lately.

Joy-Anna's 2-year-old son Gideon will become a big brother this August, but he doesn't seem especially focused on the future of his family or anything much beyond just making a hilarious mess these days. On Tuesday, Joy-Anna shared a photo of Gideon on Instagram showing him basically just chilling out in his diaper in the kitchen spilling milk all over the counter. And the floor. And the stool he is standing on. And the one next to him. He doesn't look like he got any on himself, so that should be considered something of a success.

Now is his mom crying over spilled milk? Apparently not. "It's been one of those mornings...," Joy-Anna captioned the photo, which has me thinking she is taking it all in stride, which bodes well for her when she becomes a mom of two.

Several other moms took to Joy-Anna's post to commiserate, with one follower noting "thank God it isn't paint," which is very true. Another mom noted that milk is messy enough on its own, writing, "Ugh. Cleaning up spilled milk is the worst. That was one way God grew my patience."

Joy-Anna doesn't appear to be too upset, perhaps because she was raised in a family with 19 kids and there must have been a pretty decent amount of spilled milk growing up over the years. In fact, Joy-Anna has posted plenty of photos of her little boy getting messy and having the time of his life with pride, like the photo she shared of Gideon standing in a mud puddle back in March. "Mud puddles + 75 degrees = One happy boy," she captioned that sweet post.

Now that little Gideon Forsyth is 2 years old, his mom can probably expect him to get into some mischief. Fortunately she appears to be prepared for whatever happens. Spilled milk and all.