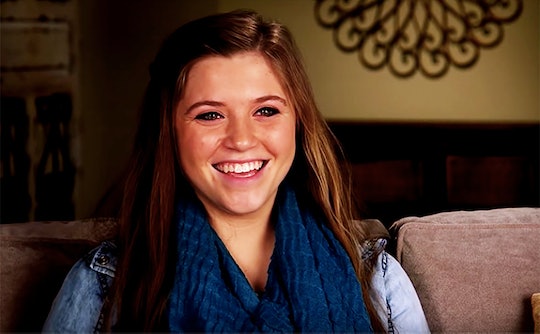 All is usually quiet in Duggarland as of late because there are no pregnancies or courtships going on at the moment. And given the lull in activity, it's fair that some people are commenting on the married Duggars' Instagram accounts asking if they're expecting. But one fan assumed Joy-Anna Duggar is pregnant, a baseless theory that the mom-of-one shot down with the perfect amount of playfulness.

John-David Duggar and Abbie Burnett tied the knot earlier this month, marking the last major Duggar event. It's pretty odd that nothing else is going on milestone-wise with the large family of 19 kids, as it's not uncommon for multiple courtships, engagements, and pregnancies to be happening at once.

On the flip side, however, there was a recent Duggar baby boom. Joy-Anna delivered her first baby in February, Kendra Caldwell gave birth in June, and Jinger Duggar welcomed Felicity in July.

Given the recent births, many fans have theorized that either Jessa Duggar, Jill Duggar, or newlywed Lauren Caldwell will get pregnant next. But there are still a few folks who suspect Joy-Anna Duggar is next in line, considering nine months have passed since Gideon's birth. It's not uncommon for the Duggars to conceive quickly after a birth, after all.

Although Joy-Anna is not a stranger to pregnancy rumors, she's not as well-versed in dealing with people who assume she's already pregnant. But luckily for the 21-year-old, she has no problem dealing with this type of awkward situation.

It all went down after Joy-Anna shared a photo of herself with her husband, Austin Forsyth, and her 9-month-old son, Gideon, to Instagram. One fan commented on the pic: "I think Joy-Anna is pregnant."

I don't think it's necessary to go through the song and dance of explaining why it's not OK to make assumptions about another person's body, but I'll reiterate that it's not appropriate to do. And that sentiment applies to people who are well-meaning, too.

I like this reply for a few reasons. For starters, it's short but sweet. Secondly, the wink face is the perfect amount of playfulness. It's almost as if Joy-Anna is trolling her fans in the most respectful way possible.

Of course, it's possible I'm reading way too much into this wink face.

As for the original commenter? They have aren't phased by the backlash surrounding their pregnancy assumption. They commented on Instagram: "Is funny how a simple comment can start a thread, lol... the fact I said 'I think Joy is pregnant' is not the same as Joy looks pregnant and she answered saying she was not and you all are waiting for her to pay attention and answer you, lol.. now I'm going to see how many comment starting now."

So, who will announce a pregnancy next? Although there are plenty of likely candidates in the Duggar household at the moment (each Duggar couple has been open about wanting a big family), I think it's probably best that people relax about the baby stuff for privacy's sake.