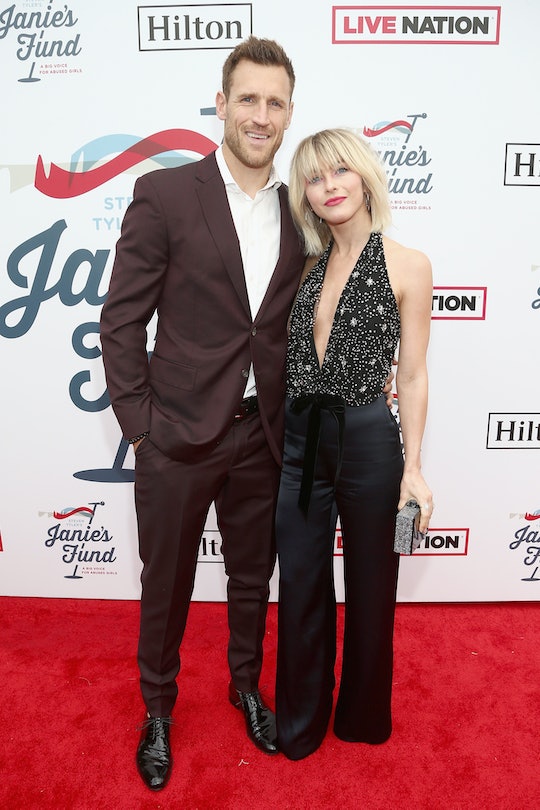 Nothing ever truly prepares you for motherhood, but it does come more naturally to some than others. Julianne Hough has been married about two years, and it looks like she and her beau have started looking forward to building a family. Hough's husband Brooks Laich is "so excited" to see her as a mom for the cutest reason. The professional hockey player recently gushed about all the reasons Hough would be a good mom, noting that she's already a doting mother-figure to their dogs.

Laich didn't reveal whether he and Hough are trying to have kids just yet, but did tell Us Weekly he's looking forward to when that day finally comes. He said that Hough, 30, treats their family pets as if they're her "babies" — a sure sign she's more than ready to assume the role of mom, Laich said. He added that he believes she'll be "involved heavily" in supporting whatever kind of people their children turned out to be, and any "goals and dreams" they had.

Although Laich and Hough haven't started having kids yet, friends of theirs have. The athlete said Hough is super hands-on and nurturing with their friends' kids, and others around her.

Hough and Laich have turned to IVF in their quest to become parents, TODAY reported. Laich, 35, previously said during an interview that he and the former Dancing With the Stars judge "want to have children in our future," and hoped IVF would increase their chances. Hough told Women's Health she suffers from endometriosis, a common condition caused by the tissue on the uterus growing outside of it in other places according to Prevention.

Hough explained that her condition affected her ability to be intimate with her husband. She told Women's Health she sometimes had to stop Laich "in the middle" due to pain.

"It can definitely cut things short," she told the magazine. "Sometimes we're in the middle and I'm just like 'AH, stop!'"

Laich spoke about his wife's condition, and how it affected their chances of getting pregnant, on his podcast, cHow Men Think with Brooks Laich & Gavin DeGraw. Laich revealed that people with endometriosis sometimes have a hard time getting pregnant, and while it's not impossible, there are easier ways to go about it.

"She has endometriosis — which could complicate pregnancy — it doesn't mean it will, but it could — and so the smarter thing for us to do is freeze some of her eggs and if we need this as a back up plan in two years or three years from now, whenever we want to start having kids and maybe we can't, we have a back-up plan," Laich said on the podcast.

It's clear Laich and Hough have pretty much covered all their bases when it comes to preparing to have children. Like I said, nothing ever truly gets you ready for it, but it doesn't hurt to try. Laich and Hough are surely going to be great parents when the day comes.