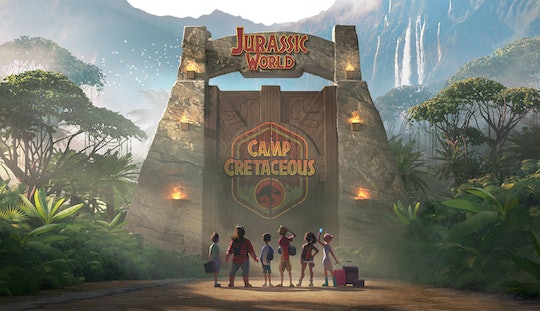 A 'Jurassic World' Animated Series Is Coming To Netflix

As long as Netflix is around, DreamWorks will continue churning out brand new animated content exclusive to the streaming platform. At least, that's how it seems lately, and things are about to get a lot more interesting when Jurassic World: Camp Cretaceous premieres on Netflix in 2020. The animated series produced by DreamWorks Animation as a continuing deal with Netflix takes place around the same time as the events that began with the 2015 live action film Jurassic World. The reboot of the original prehistoric movie trilogy brought dinosaurs back to life (so to speak) for a new generation and the animated series seems like it will continue to entice young dinosaur lovers everywhere.

Jurassic World: Camp Cretaceous follows a group of six teenagers who have been given the opportunity to attend a brand new adventure camp on the other side of Isla Nublar. The idea is probably to give the kids the experience of a lifetime in the form of open exploration, but things go awry when escaped dinosaurs make their way across the island and the teens have to learn to fend for themselves. Suddenly, they are cut off from all outside contact and they have to work together to survive. It's not unlike the plot to most Jurassic Park or Jurassic World movies, but likely with a lot less dino carnage.

Despite the blockbuster success of both the Jurassic Park and Jurassic World franchises, this marks the first successful foray into the world of animation. In 1993, Universal Cartoon Studios began production on the animated series Escape from Jurassic Park, which was to be based on the 1993 movie. The show never made it to air, however, and was cut before the official trailer was even released. Artist William Stout has said that he has a copy of the trailer, but the official series was never released. And, from the sounds of it, never went beyond a few key scenes.

That's why Netflix's upcoming Jurassic World animated series is such a big deal to fans from both movie eras. While the show takes place in the setting first introduced in Jurassic World, it's safe to say that it pays homage to all of the Jurassic movies in its own way.

Scott Kreamer, who works on Netflix's Pinky Malinky, and Lane Lueras from Kung Fu Panda: The Paws of Destiny will serve as showrunners and executive producers of the 2020 series. That could mean a lot of silly moments thrown in to offset the horror of running way from terrifying dinosaurs, given that both of those cartoons are more on the comedic side than anything else.

DreamWorks Animation and Netflix have already released a handful of successful animated series since their multi-year deal, including the Tales of Arcadia trilogy, She-Ra and the Princesses of Power, Spirit Riding Free, Trolls: The Beat Goes On!, and The Boss Baby: Back in Business. Jurassic World: Camp Cretaceous is another of many more exclusive animated series to come from that partnership and although fans will have to wait until 2020 to get a good look, the success of Netflix's other DreamWorks series could be an indication of this show's eventual success too.

Judging by the promo photo for the Jurassic World animated series, it looks like we can expect the usual suspects when it comes to a group of teenagers who probably won't get along at first. In other words, expect the book nerd and the jock to butt heads for a little while before they finally see that their survival depends on giving up their preconceived notions about themselves and their egos. Jurassic World: Camp Cretaceous honestly looks like the cartoon version of a much longer Jurassic World installment and I am here for it.