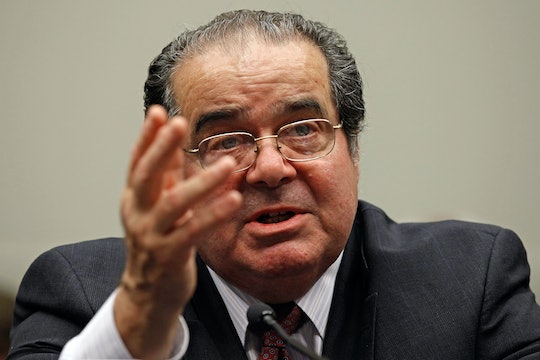 Saturday at the Cibolo Creek Ranch in West Central Texas, Associate Supreme Court Justice Antonin Scalia was found dead at the age of 79, The New York Post and many other outlets reported. According to MySanAntonio.com, he died of natural causes. Scalia reportedly arrived Friday at the ranch, where he attended a party. When he didn't show up for breakfast Saturday morning, hotel staff went to check on him and discovered his body.

According to MySantAntonio.com, the U.S. Marshal Service, the sheriff of Presidio County, where the ranch is located, and the FBI investigated Scalia's death. An unnamed official said no foul play was believed to be involved.

Scalia, who was born in New Jersey and was the son of Italian immigrants, was appointed to the Supreme Court in 1986, according to Biography.com. In the years after Reagan appointed him, Scalia became known as one of the most conservative members of the court. (The Atlantic once called him "the Court’s longest-serving and possibly most-crotchety justice.") He is known for his staunch belief in Constitutional "originalism," meaning that he thought the Constitution should be interpreted as its authors, the founding fathers, intended when they were composing it two centuries ago, CBS News reported.

He also opposed decisions that would mean judicial intervention in the legislative process. In a 2008 interview with 60 Minutes, he explained that he is aware that ideas change over time and that societies often choose to alter their laws in response:

Because values change, legislatures abolish the death penalty, permit same-sex marriage if they want, abolish laws against homosexual conduct. That's how the change in a society occurs. Society doesn't change through a Constitution.

As the news of Scalia's death spread Saturday, it provoked both an outpouring of statements and tributes to the deceased justice but also questions about who his successor will be and whether it will be an Obama appointee. Republicans in the Senate stated almost immediately that Scalia should not be replaced under President Obama, according to The Washington Times, and the GOP presidential candidates echoed that sentiment at the GOP debate Saturday night, Yahoo reported.

Obviously, today is the time to remember Justice Scalia’s legacy. I plan to fulfill my constitutional responsibilities to nominate a successor in due time. There will be plenty of time for me to do so and for the Senate to fulfill its responsibility to give that person a fair hearing and timely vote.

That Scalia's death has such a huge impact on, really, America's future says a tremendous amount about his level of influence, but the outpouring of love, condolences, and accolades even from his idealogical opponents demonstrates that Scalia was also beloved and appreciated for who he was. He is survived by his wife, Maureen, and their nine children.