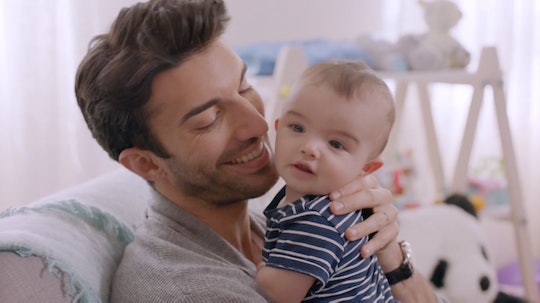 When it was first suggested to actor Justin Baldoni that he and his wife Emily introduce their then-5-month-old son Maxwell to peanut foods, he was hesitant. Like any parent, the Jane the Virgin actor was aware of the dangers related to peanuts and allergies, so he didn't want to make a decision that could impact his young son's health. In fact, Baldoni tells Romper, he had some questions about introducing peanuts at an early age as a way of preventing allergies down the road.

More Like This
18 Best Sand Toys In 2021 For Babies, Toddlers, & Kids
This Is Why Your Toddler Wants To Feed You All The Time
What Parents Should Know About The New CDC Mask Guidelines
Best Montessori Learning Towers: 11 Kitchen Helper Stools For Toddlers

"As much as I want to say I'm super brave with all of these things, when you have a child, suddenly everything around you can become a possible threat to your kid," says Baldoni, who also has a 3-year-old daughter Maiya. He adds with a bit of humor that a low-hanging branch or car traveling at a once-acceptable speed can cause even the chillest parents to feel protective of their little ones. "And something as simple as a peanut can also feel like a threat," Baldoni says.

But a 2015 study called Learning Early about Peanut Allergy (LEAP) and published in the New England Journal of Medicine, showed that regular consumption of peanut foods starting in early infancy could reduce — or prevent altogether — peanut allergies in high-risk infants by 86 percent compared to those who did not consume peanuts. A second study, LEAP-On, found that "if high-risk children ate peanut foods regularly until 5 years of age, there was no increased risk of developing peanut allergy during their sixth year of life even if they avoided peanuts for one year," according to PreventPeanutAllergies.org.

For the Baldonis, the facts were enough to lead them to the family pediatrician with questions. When the doctor confirmed the studies and gave Maxwell the green light to try peanuts at home, the couple mixed a bit of peanut powder into Emily's expressed breast milk to see how their little guy reacted.

"As a parent, all you want to do is make sure you are giving your child the best chance at having a bright and happy future," Baldoni says in the first video of a series of three for the National Peanut Board. "If there's something I can do to make sure that my son doesn't develop an allergy when he's older, I kind of think it's my job as a parent to try it now."

Baldoni says Maxwell, who is now 9 months old, had no reaction to the introduction of peanut powder — except for the fact that he absolutely loved it.

If you do decide, like the Baldonis, to introduce peanuts to your little one, then it's important to keep a few parameters in mind. First off, the time to give your child a bit of peanuts in an effort to prevent allergies down the road is between 4 and 6 months of age. If your infant has severe eczema, egg allergy, or both, then you should chat with your healthcare provider before giving them any peanut foods. (You can also just play it safe like the Baldonis and ask your doctor for guidance even if your child doesn't have any known allergies, which was the case for Maxwell). Depending on your child's level of risk, your doctor might want to do an allergy test or introduce baby-friendly peanut foods under medical supervision, according to Prevent Peanut Allergies. Once cleared to try peanuts, infants in this category continue to consume them regularly (2 grams of peanut protein, three times per week).

On the other hand, if your infant has no eczema or any food allergies, then you can introduce them around 6 months of age, along with other solid foods.

"Growing up I've known a lot of people who are allergic to a lot of things, even in my family," Baldoni says in the video, adding that his sister, Emily's sister, and even Elias Janssen — who plays Mateo on Jane The Virgin — have food-related allergies. "We just really want to be mindful of ways that we can combat that. I thought, 'Man, this could really be something positive, not just for our family, but also for the world.' It could even save a life."

If you'e worried about introducing your child to peanuts at an early age, then there are a few symptoms you can be on the lookout for that will help ease your mind. For starters, most allergies develop within minutes of eating a food, but can occur up to two hours after ingestion. Allergy signs and symptoms can include mild reactions, like a new rash or a few hives around the mouth. More severe symptoms include swelling of the lips, eyes, or face, vomiting, widespread hives on the body, breathing symptoms such as repetitive cough, wheeze, or any difficulty breathing, a change in skin color (pale, blue), or sudden tiredness/lethargy/seeming limp.

And as always: Do not hesitate to seek immediate medical attention and/or call 911 in the instance you suspect an allergic reaction.

As for Baldoni's personal feelings about peanuts, he laughs, saying it's a love/hate relationship, specifically "because I can't stop eating it." And, really, who can't relate to that?