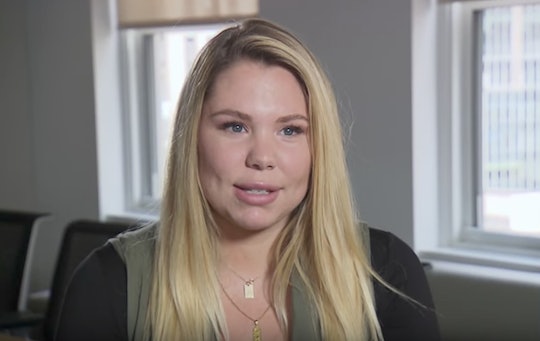 E! Live From The Red Carpet/YouTube

Kailyn Lowry Has *Finally* Chosen A Name For Baby Lo

On Aug. 5, Kailyn Lowry welcomed her third son into the world. Following the birth, Lowry struggled to find the perfect name for her little one, and she repeatedly took to social media to express her frustrations about picking the right moniker. Well, Teen Mom 2 fans, I have good news — Kailyn Lowry has finally chosen a baby name for her third child, and the name is really cute.

Late Sunday night, Lowry revealed her baby's name on Instagram. The big reveal followed months of Lowry referring to her third child as "Baby Lo," a nod to Lowry's last name and the last name of the baby's father, Chris Lopez. Although Lo would have been a sweet name for baby number three, Lowry told fans "Baby Lo" was just a placeholder until she could settle on the official name. Lowry also revealed that the baby name would be unveiled on a baby blanket. True to her word, Lowry announced the baby's name, Lux Russell, on the most adorable baby blanket ever.

Lux Russell is a really sweet name, especially since it has a modern yet traditional feel — the moniker is essentially the best of both words. Following the unveiling of the baby name, many fans complimented Lowry on her decision. One commenter wrote, according to Instagram:

I love the name Kail! I think it fits him perfectly & it’s not a name you hear everyday which is even better!

Love love love his name really unique and he is a cutie pie.

And if you're wondering how Lowry finally chose the baby name, it's a pretty wild story. According to The Hollywood Gossip, Lowry and her friend Bone came up with the name during a trip to the hospital on Sept. 18. Apparently, Lowry and Bone were at the hospital to fill out the form needed to officially name the baby, but Lowry still couldn't come up with a name. At first, Lowry tried to draw inspiration for a name by reading names off of the hospital walls, because why not. Lowry explained, according to The Hollywood Gossip:

Bone and I are at the hospital trying to name Baby Lo. We still don’t have a name, so we’re going to go through these guys names on the wall. Harry, John, Herman, Alan, Wallace, Maurice, Walton, James, that’s a no, Frederick is a no, Wayne, Edward, William, Robert, Tom ... all these names are so basic.

Finally, Lowry and Bone decided to put their top choices for a name in a hat. Lowry then reportedly asked a nurse at the hospital to choose a name out of the hat, and sure enough, Lowry's "top choice" was picked, according to InTouch Weekly:

My top choice was picked. Bone is pissed. She wanted to name him Benji and it didn’t get picked.

So, although Lowry had decided on a name on Sept. 18, she waited a few weeks before sharing the exciting the news with fans. I think it's safe to say Lowry is the master of suspense when it comes to baby names.

Of course, there's no "right" way to pick out a baby name. The naming of a baby is a personal and important journey for parents, and many parents often struggle to find a name for their child. Lowry's naming journey is definitely relatable, and it's great that a good percentage of her fans were supportive of her during the process. As for the fans who weren't as understanding, it's obvious Lowry didn't let their judgmental comments bring her down. New baby endorphins are quite powerful, people.

Now that Lowry has officially settled on a name, she's focused on enjoying all of Lux Russell's firsts. Just a day before Lowry announced the name, she shared a heartwarming picture of herself and her three boys enjoying a fall festival.

Whether you like Lowry's baby name or not (not that it matters what anyone else thinks, to be honest), you have to admit Lowry has a lovely family. Lowry is lucky to have three healthy sons, and at the end of the day, that's what's most important.