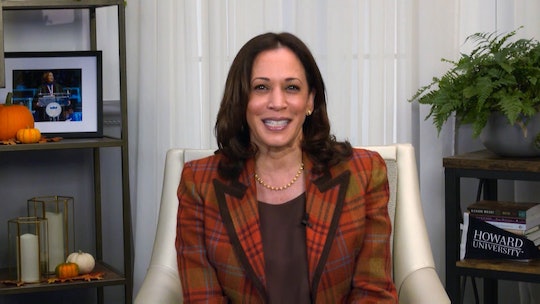 If you need a break from furiously stalking the polls on TV, might I suggest watching Kamala Harris chatting with her great niece for a dose of positivity and inspiration.

On Wednesday evening, the Democratic vice presidential nominee's niece, Meena Harris, shared a video of a touching conversation between her daughter, Amara, and the California Senator. Sitting in her great aunt's lap, 4-year-old Amara and Harris chatted about the little girl's future, which, "went on for like an hour," as Meena, who is also a lawyer and children's book author, shared on Instagram.

In the video, Amara can be heard telling Harris, "I know I'm going to be president." And the VP hopeful responded, "You could be president. You could be, but not right now. You have to be over the age of 35."

"No one could be an astronaut, too," Amara replied.

In a follow-up tweet, Meena shared "for context" that her daughter wants to be both an astronaut and President of the United States.

In an essay penned for NBC News, Meena cited her aunt as being a source of inspiration to how she raises her daughters. "I sometimes joke that this is how I was raised — by strong, brilliant women who ran around saving the world and helping one another succeed: a hardworking single mom, a grandmother who taught me I should always make an impact, an auntie who showed me I could do and be whatever I wanted to be," she wrote.

"In every sense this community of women made me who I am today," her essay continued. "Now that my partner and I are raising a social justice family of our own, we're doing everything we can to provide the same experience, instill the same lessons, and lift up the same kinds of role models. Likewise, my Aunt Kamala takes very seriously her role as a great aunt in helping to shape my daughters. If she had her way, the girls (only 2 and 4 years old) would be on the campaign trail with her every day."

As more mail-in ballots are counted, it will only be a matter of days before the country finds out if Kamala Harris will be the first female vice president of the United States. Well before Election Day, though, she already made history when she became the first Black woman to be nominated for vice president by a major political party. And while little Amara has to wait until she's at least 35, she could very well follow in her great aunt's footsteps.