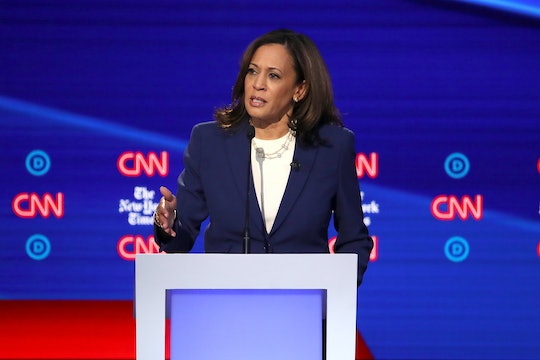 Weeks after the noticeable lack of questions centered around reproductive and abortion rights in the 2020 Democratic presidential primary debates sparked criticism among viewers, one congresswoman sought to rectify the situation, with or without moderators' approval. California Sen. Kamala Harris forced the issue of reproductive rights into the spotlight at the latest 2020 debate, urging moderators to include questions about the issue and recently passed laws designed to restrict women's access to care.

"This is the sixth debate we have had in this presidential cycle; not nearly one word with all of the discussions about health care, on women's access to reproductive health care, which is under full-on attack in America today," Harris said when talk on the debate stage turned to Medicare for all. "It's outrageous."

While other candidates debated how to fund a Medicare for all program, Harris sought to urge debate moderators to include reproductive and abortion rights in conversations about health care, noting the handful of states that passed restrictive abortion laws earlier this year.

"There are states that have passed laws that will virtually prevent women from having access to reproductive health care," Harris continued. "And it is not an exaggeration to say women will die. Poor women, women of color will die, because these Republican legislatures in these various states who are out of touch with America are telling women what to do with our bodies."

In forcing the topic of reproductive rights into the conversation, Harris was quick to let viewers know where she stands on the issue: "People need to keep their hands off of women's bodies and let women make the decisions about their own lives," she said.

The senator then went on to call reproductive rights "a significant health care issue in America today" and urged moderators to let candidates talk about it.

It's no surprise that Harris has been frustrated by moderators' failure to include questions about reproductive rights and abortion care in the Democratic presidential primary debates. She took to Twitter to express that frustration after the September debate, tweeting, "The #DemDebate was three hours long and not one question about abortion or reproductive rights."

In a post debate interview with CBS News, Harris said that she'd "wanted to talk about the issue of choice" during the debate "because it is literally impacting half of the population," a reference to the fact that women make up 50.8% of the nation's population, according to the the U.S. Census Bureau. "We have had six presidential debates and this has not been a topic of serious discussion," she said with disappointment.

Although the moderators of Tuesday's debate weren't ready to discuss reproductive rights when Harris brought the topic up early in the night, they did eventually return to the topic. Candidates were asked how they would stop states like Ohio, which passed a law banning abortion as early as six weeks in April, from restricting access to abortion.

While Rep. Tulsi Gabbard and Sens. Amy Klobuchar and Cory Booker said they would codify Roe v. Wade into law, Harris said she would task the Department of Justice with reviewing any law passed at the state level that is thought to violate the Constitution. If the law is not found to be compliant with the Constitution or Roe v. Wade, it will not be allowed to go into effect, she said.

On social media, Harris was applauded for attempting to force the conversation to turn to reproductive and abortion rights. "Thank you Kamala for being the first to bring up abortion during a discussion about healthcare," author Jessica Knoll tweeted. "Abortion should not be its own issue when it IS healthcare."

And although it was nice to see four candidates discuss their plans to address state-level restrictions to reproductive rights, perhaps the next presidential debate could include a more in-depth discussion on abortion access and reproductive rights? After all, Harris is right. Reproductive and abortion rights are significant health care issues currently under attack across the country.