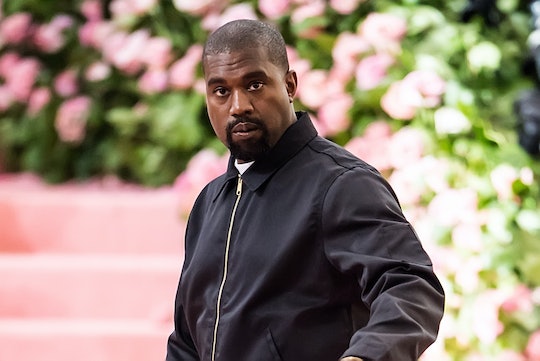 As celebrities vocalized their outrage following another police killing of an unarmed Black man, one outspoken voice had been noticeably absent. On Thursday, however, news broke that Kanye West created a college fund for the daughter of George Floyd, the 46-year-old Black man who died after a white police officer knelt on his neck for nearly nine minutes.

A representative for West confirmed to Variety that the rapper set up a fund to fully cover the cost of Floyd's daughter Gianna's college tuition. According to the Daily Mail, West specifically set up 529 college savings fund for the 6-year-old. News of West's donation to Gianna's future education comes just a day after the little girl told Good Morning America she wants to be a doctor when she grows up so she can "help people."

According to Variety, West has also donated $2 million to charities supporting efforts demanding justice for Floyd, Ahmaud Arbery, a 25-year-old unarmed Black man who was chased and killed by two white men while jogging in Georgia, and 26-year-old Breonna Taylor, who was shot and killed by police who entered her home in March while she was sleeping. She would have turned 27 on June 5.

Additionally, West has pledged to cover the legal costs Arbery and Taylor's families will incur as they seek justice, according to Variety, in addition to financially aiding Black-owned businesses in his hometown of Chicago. The rapper also marched with Chicago Public School students on Thursday to demand that the city keep police officers out of schools, according to NBC Chicago.

His wife, Kim Kardashian, has also pledged to financially support the Black Lives Matter movement, tweeting on Thursday that she would be donating money from her brands to four different organizations focused on fighting racial injustice: Black Lives Matter, NAACP Legal Defense Fund, National Urban League, and Color of Change. "We firmly believe that #BlackLivesMatter and we are committed to supporting and participating in the change that needs to take place," she wrote.

You, too, can donate to help the Black Lives Matter movement and contribute to Gianna's future. An official GoFundMe page was set up earlier this week in honor of Floyd to help support his 6-year-old daughter as she grows up and it has already raised more than $1.6 million.