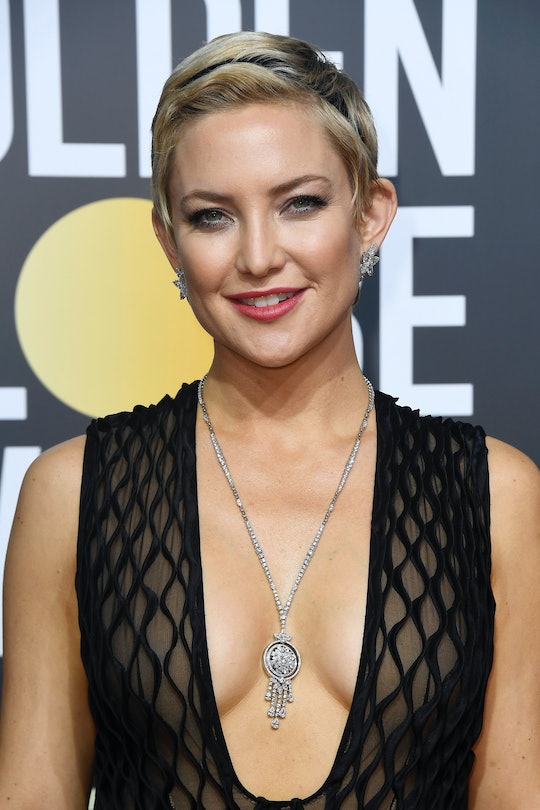 Maternity wear is, more often than not, a hit or miss. Add in another element — like fitness wear — and your options for stylish duds are numbered. Recently, though, clothing companies have caught wind of this and moms-to-be could be getting some new options from the activewear company Fabletics. According to People, one of its founders, pregnant Kate Hudson, might be launching a maternity activewear line and, if so, it's bound to be as on-trend as everything else the company has produced.

Hudson talked about the possibility — indicating that it’s highly probable it’s going to happen — in an interview with People when she announced a new partnership for Fabletics. When asked whether her own pregnancy — she’s expecting a baby girl with boyfriend Danny Fujikawa — is inspiring her designs she told People, “I don’t know — our wheels are turning over in our design center right now but, you know, we never know, wink wink.” That’s sounds a lot like a very strong maybe, right?

Hudson was talking to People in advance of the release of a Fabletics capsule collection called Girl Almighty, which will channel funds to help girls around the world. The limited-edition line will work with one of Fabletics charity partners, the United Nations Foundation’s Girl Up campaign, which supports girls through education and opportunities, according to People.

A portion of the proceeds from Girl Almighty will be funneled to Girl Up’s SchoolCycle program, which provides bicycles and bike repair training to girls to help them eliminate “one of the biggest obstacles keeping girls out of school: distance,” according to the organization’s website. The group gives the example of Guatemala, where six out of 10 indigenous girls leave school before age 15, often owing to long walks that leave them vulnerable to violence or harassment.

Hudson told People that she’s thrilled to be working with SchoolCycle. “It’s about how we can become a global support system of women, starting with young girls and teaching them to advocate for the things they believe in,” she told the publication. To support the work, Fabletics has designed a line of sports bras, tank tops, hoodies, shorts, and leggings, according to People, which will be available online and in their stores on May 8. Fashion website WWD lists the prices for the Girl Almighty line between $24.95 and $79.95.

Fabletics was launched by Hudson and two business partners in 2013 to create a brand of luxury activewear at an accessible price point, according to the company’s website. Hudson often takes to her Instagram to promote the company’s new products.

Hudson is currently pregnant with her third child, a girl whose sex she revealed last month on her Instagram with a video of her balloon-pop reveal party. “If you’ve wondered why I’ve been so absent on my social channels it’s because I have never been more sick! It was the most sick first trimester of all my children,” the actress explained on the post. She also explained that the couple tried to keep the pregnancy quiet as long as they could, but since she was now showing it was just easier to let everyone in on it.

Hudson and Fujikawa have been friends for 15 years, as his stepsisters are some of Hudson’s best friends, according to Us Weekly. The began dating about a year ago and went public with their romance with an Instagram post during a hike.

Keeping up with Hudson's third pregnancy has been so exciting for fans and hearing that Fabletics could possibly be starting a maternity line makes this journey so much more fun to follow.