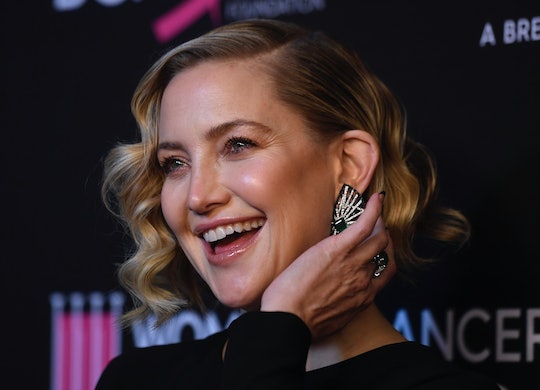 There are so many great benefits to having a bunch of kids, trust me because I have a bunch of kids. You are giving them built-in best friends if you're very lucky, not to mention having more than one kid means some of the entertainment expectation is lifted off of your shoulders a little. But there are definitely drawbacks, and Kate Hudson recently wrote an essay about a fairly obvious one. Now that she is a mom of three, Kate Hudson's kids officially outnumber her. And sure this might seem like simple math to you, but it is honestly overwhelming when you are in the thick of things.

The Fabletics entrepreneur is mom to three kids: 15-year-old son Ryder from her marriage to Black Crows' Chris Robinson, 8-year-old son Bingham with ex-boyfriend Matt Bellamy, and 7-month-old daughter Rani with her partner Danny Fujikawa. While the busy mom is clearly accustomed to juggling things in her life as someone with several fulfilling career outlets, it turns out having three kids was a bit busier than she expected.

As the Almost Famous actress shared in an essay for In Style published on Aug. 6, welcoming a third child became something of a numbers game. Or an outnumbered game, as it were. Hudson explained in her essay that she was warned about the challenges, but didn't really listen. "My life is a bit of a juggling act with kids in completely different stages of their lives... it's challenging once you're outnumbered," she wrote for In Style. "For some reason, when you have a third baby, people go, 'Oh, be careful!' Of course, as usual, I didn't heed the warning. I was like, 'Yeah, whatever! I'm going in!'

Of course, in Hudson's case her children's difference in ages and stages can also cause a bit of confusion beyond the fact that she now has more kids than hands (a sobering realization when it happens, take my word for it). She has a teenager, a child, and a baby. That's a whole lot of different expectations from a whole lot of people. What's a mom to do, you ask? Roll with it.

It probably helps that Hudson is shifting the way she looks at herself as a parent as well. Now that she lives in a household with another lady, Hudson told Entertainment Tonight in January that the balance has righted itself in her household. "We're sort of balancing out the masculine and the feminine," she told the news outlet. "It's great — it's a lot right now, I'm not going to lie — it's busy in the house. It's a lot trying to juggle and manage, and balance is a daily ... it's like, the family huddles around and everyone gets their strategy and then and we're like, 'Hike! Let's do this, let's spread out.' But it's good."

When you are outnumbered by your kids I think the best thing you can do is manage your expectations and, yup, take things day by day. If parenting is a classroom and you are getting graded at the end of the day, aim for a C+, maximum. Because it's going to get rough out there. Trust me.