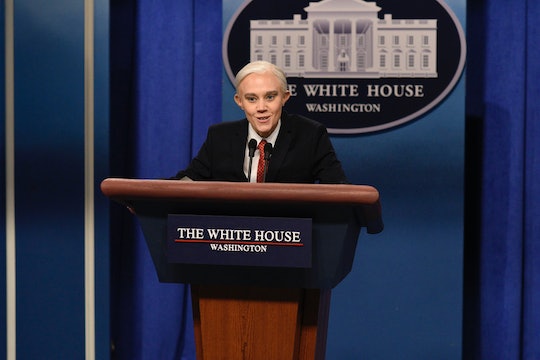 When it comes to Saturday Night Live and anything political, Kate McKinnon can basically do no wrong, from her Hillary Clinton portrayal to her newest perfect impersonation of Attorney General Jeff Sessions. So her portrayal of Sessions in the SNL's Forrest Gump Parody skit was obviously spot on and nothing short of painfully accurate.

I mean you can't really go wrong when you're doing something with Forrest Gump and have Sessions playing the hilariously clueless Gump in question. In the SNL Forrest Gump parody, McKinnon's Sessions was sitting on the famous bus station bench, talking to each person who sat down next to him about his follies as the attorney general.

At one point, he showed the now-famous photo of Kellyanne Conway sitting on an Oval Office couch with her legs tucked under her. "This is my friend, Kellyanne," he said. "She ain't got no legs." Obviously it was in reference to Lieutenant Dan from the Forrest Gump movie, but it was perfectly placed. Then, when Sessions in the SNL Forrest Gump parody busted out the requisite box of chocolates and offered them to Leslie Jones on the bench next to him, he commented that "There sure are a lot of brown ones in there."

In a recent policy change, Sessions overturned the policy that the Obama administration had implemented to have a civil rights investigation into the way law enforcement is treating people of color. Instead, Sessions declared that the money should go to aiding law enforcement rather than helping to monitor the problem within law enforcement across the country. So the Forrest Gump parody on SNL definitely hit home.

Obviously the best part about the SNL Forrest Gump parody was when Octavia Spencer showed up as her former character from The Help, Minny. Instead of being legitimately friendly to the attorney general, Spencer gifted him with her famous pie. For those of you who aren't familiar with her role in The Help, her character famously baked a pie with a special ingredient that definitely looked like the real thing but tasted a lot worse.

As the bus stop patrons switched from person to person, Sessions went from insisting that he had nothing to do with any Russians to admitting that yes, he'd spoken to the Russians quite a bit. Then there was the quick appearance of Beck Bennett's Putin. But what is probably most important about the SNL Forrest Gump parody, other than the fact that it could have gone on for several more minutes, is that McKinnon can do no wrong no matter who she plays.