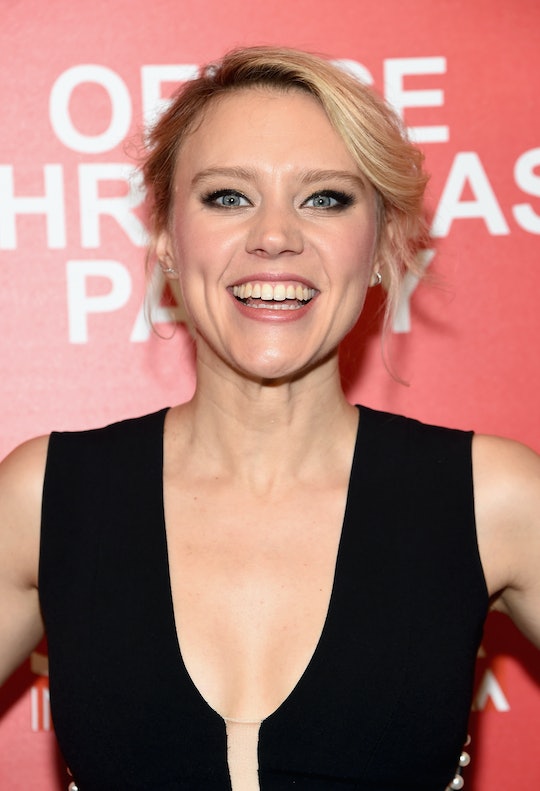 We've all seen the Arthur memes that make their way through social media daily and, as adults, we can appreciate them. But I'd be lying if I said that The Magic School Bus wasn't a childhood favorite of mine. Personally, I identified with Arnold because he had every reason to be weary of Ms. Frizzle and that wacky school bus. But during a press junket on Wednesday afternoon, Netflix revealed that in its upcoming revival series, Kate McKinnon will voice Ms. Frizzle in Magic School Bus Rides Again and it's the perfect way to get parents on board with actually watching it again.

In the original series, Lily Tomlin voiced everyone's favorite adventurous cartoon teacher, but now that Netflix is set to revive the series and make it more current, having McKinnon voice Ms. Frizzle in the highly anticipated reboot feels like the perfect choice. The Saturday Night Live star has proven herself able to not only portray pretty much everyone (she's literally the best Justin Bieber there is, including the real guy), but she can change her voice as needed as well. Oh, and it doesn't hurt that she's just downright hilarious.

McKinnon as Ms. Frizzle in Magic School Bus Rides Again will lend her own brand of wackiness to the already outlandish teacher, but she'll also make it possible for more than just kids to flock to their TV and streaming devices.

Not only do most millennial parents already know and love the cartoon from their childhoods, but who doesn't love McKinnon in some capacity? It's like a win all around. And, according to producer Stu Stone (who also voiced Ralphie in the original — mind blown), there will be plenty of other big names lending their voices from time to time. Stone told TMZ that "there are tons of cameos planned" and that since the show was so popular back when many current parents today were kids, there will be that many more people ready to watch the series when it premieres on Netflix.

There has been talk about bringing a Magic School Bus reboot to life for the past couple of years now, but with McKinnon officially on to play Ms. Frizzle and the buzz picking back up, it's likely going to come sooner rather than later now. And don't worry — it's not going to be a remake of all of the adventures and shrinking bus storylines from years' past.

Magic School Bus Rides Again will be set in present-day times with a more modern school bus itself for Ms. Frizzle and her class to use while utilizing STEM in the teaching lessons. The original series featured lessons on everything from the human body to ancient dinosaurs, so there will still be plenty of teaching involved, but in HD this time.

I can't wait to relive the magic with my own kid and watch a new generation appreciate just how great this concept was and still is today. So fasten your seat belts, everyone — it's going to be one heck of a ride!