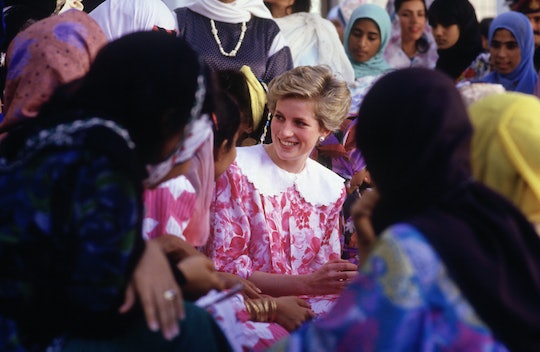 Princess Diana was an inspiration in so many ways to so many people, not the least of which as a style icon. During her lifetime, she was considered a leading trendsetter and her influence is still felt today. Especially through her daughter-in-law. In fact, Kate Middleton recently channeled Princess Diana's style once again during a Zoom chat. Whether the Duchess of Cambridge was consciously or unconsciously getting inspiration from her mother-in-law is not known, but royal watchers certainly appreciated the lovely walk down memory lane.

Middleton recently sat down to film a brief message in honor of mental health awareness in partnership with her own charity Heads Together and Radio Centre UK. The short video featured several British celebrities alongside Middleton and her husband, Prince William, reminding people who might be struggling with mental health issues during the coronavirus lockdown in the United Kingdom that they are "all connected."

Perhaps the message of being connected had royal watchers thinking about Middleton's connection to Princess Diana, who tragically died in a car crash in Paris in 1997 before she had a chance to meet her. Or perhaps it was the dress she wore, a red floral dress with a white collar from Beulah London.

While many social media users took to the Kensington Royal Instagram feed to praise the important message both Middleton and Prince William shared, some eagle-eyed royal fans noticed that Middleton's dress looked familiar, as The Daily Mail first reported.

The Calla Rose Red dress from Beulah London, which retails for around $675 with part of the proceeds going to end modern slavery, seemed to look an awful lot like a certain dress Princess Diana wore during a visit to Oman in November 1986.

The dress Princess Diana wore on that visit was a pink and white number with a white collar created by Irish designer Paul Costelloe, and it did look quite similar to the one worn by Middleton. The royal fan account @PrincessDianaIconic shared a photo of the two dresses side-by-side and captioned the photo, "Today the duchess of cambridge used a look very similar to the one worn by her mother in law the princess of wales." Other fans took to the post to write "Beautiful HRH Duchess Catherine Elizabeth of Cambridge. Pretty and bright dress class style like mother in law Princess Diana," while another simply wrote, "Both beautiful people."