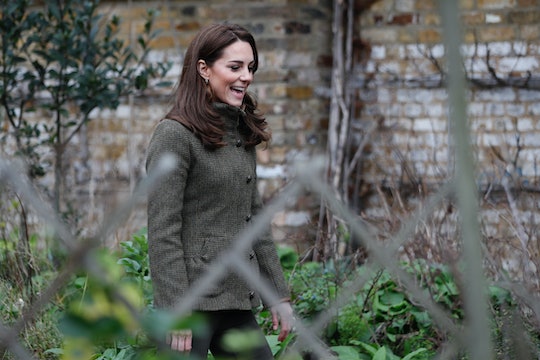 The royal family has made it their mission to focus on both mental and physical health. Some members of the family have gone above and beyond to prove their dedication to the cause. Take the Duchess of Cambridge, for example, who recently debuted an epic space for kids and adults. It's clear Kate Middleton is getting into the "swing" of garden design and it's all for an amazing cause, which makes it that much more exciting.

For this year's Chelsea Flower Show, the 37-year-old teamed up with co-designers Andree Davies and Adam White to create a "Back to Nature"-themed garden space, according to People. The space, which features a tree house with a swing seat hanging from it as its centerpiece, is designed to encourage "creative play and discovery for all generations." The woodland wilderness garden, according to People, "aims to get people back to nature, and highlight the benefits of the natural world on our mental and physical wellbeing." The outlet reported that the space was designed to be a fun place for adults and children to experience together. Middleton talked about the collaboration in a social media statement, which was accompanied by behind-the-scenes photos.

"In recent years I have focused much of my work on the early years, and how instrumental they are for outcomes later in life," she said on Twitter and Instagram. "I believe that spending time outdoors when you are young can play a role in laying the foundations for children to become happy, healthy adults."

Middleton first announced that she was working on the space in February, according to CNN. She revealed at the time that the area would include stepping stones, hollow logs, a water feature, swing set, campfire, and plenty of plants. Kensington Palace released a statement about the space after plans were unveiled.

"The design includes many natural elements that aim to stimulate active play, promoting the benefits of laying the foundations of physical health from a young age," the palace said in its statement, obtained by CNN. "It is proven that nature is good for well-being, so the garden is aiming to inspire interaction with the natural environment through its multisensory, green and blue plant scheme."

The mother-of-three has long been an advocate of mental health. In January, Middleton visited Roe Green Junior School in London, where she talked about the issues facing young people and adults. According to Parents, she said in a speech that people "of all backgrounds and of all circumstances" can be plagued by mental health issues, which is why it's so important to her to focus on treatment.

"We know that mental health is an issue for us all — children and parents, young and old, men and women — of all backgrounds and of all circumstances. What we have seen first-hand is that the simple act of having a conversation about mental health — that initial breaking of the silence — can make a real difference. But, as you here today know: starting a conversation is just that — it's a start. I see time and time again that there is so much to be gained from talking of mental health and taking the mental health of our children as seriously as we do their physical health. When we intervene early in life, we help avoid problems that are much more challenging to address in adulthood."

Fans are applauding Middleton for her efforts. It an important step in breaking the stigma, and allowing people to be open about their struggles. Hopefully Middleton's space brings joy and relaxation to all who visit.