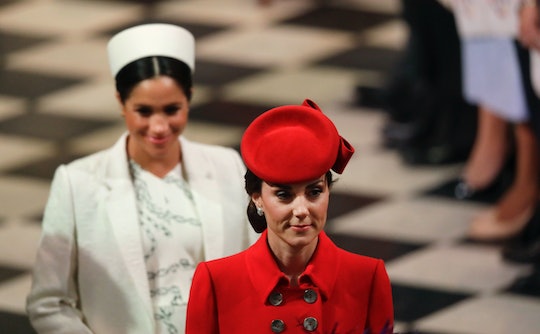 Meghan Markle has a lot on her plate these days. She is expecting her first baby with husband Prince Harry within the next month or so, she's getting ready to move into a new house, and she's still technically on royal duty which appears to take a whole lot of time. All of this to say she could well be struggling to really enjoy those precious last few weeks before she becomes a mom... but it looks like she might have some help with that. Because Kate Middleton is reportedly throwing Meghan Markle a second baby shower in London, so everyone can stop being mad that she wasn't at the first in New York now, okay?

We all remember Markle's surprise, star-studded baby shower in New York in February, right? You know, the one that cost around $200,000 with guests like Serena Williams, Amal Clooney, and Gayle King, as per Cosmopolitan? It was clearly a total blast, but it was missing a few key people. Most notably Markle's new sister-in-law Kate Middleton, the Duchess of Cambridge. And her own mother (with whom she is famously close, as we all know), Doria Ragland. Neither were present at the first shower but don't worry everyone... it looks like there will be a second and I'm going to call it the family baby shower.

At the end of February Us Weekly shared a report from a royal insider confirming Markle is expected to have a second baby shower in the United Kingdom, hosted by Kate Middleton. Although because it's a different country with different customs, it won't necessarily be called a "baby shower" per se:

There is still going to be some sort of private baby-centric event for Meghan’s U.K. people, and Kate will host. Her glam people and other relatives will be there. Not sure if it’s a total baby ‘shower,’ but you could probably call it that.

Royal expert Richard Fitzwilliams told The Daily Express that a second baby shower is in the works, and not only the Duchess of Cambridge but also Doria Ragland, soon-to-be-grandmother, is expected to be there as well:

However it is reported there will be a second baby shower in the UK and it is possible that Doria will be invited to that.

Kensington Palace has not confirmed the second baby shower at this point, perhaps because they're too busy trying to manage the split of the royal houses of Cambridge and Sussex. The two families are claiming a little independence, as per People, by creating two separate royal households. But that doesn't mean they aren't close... I mean, do you want to spend every waking moment with your brother? Of course not.

Reports that Middleton is expected to throw Markle a second baby shower will hopefully keep rift rumors at bay, because no one wants to go through the whole Kate vs. Meghan nonsense again. (I suspect Middleton and Markle least of all.)

I also suspect we won't get too many details about this baby shower. Because the royals like to leave us wanting more at every turn, and no I'm not bitter about that at all.