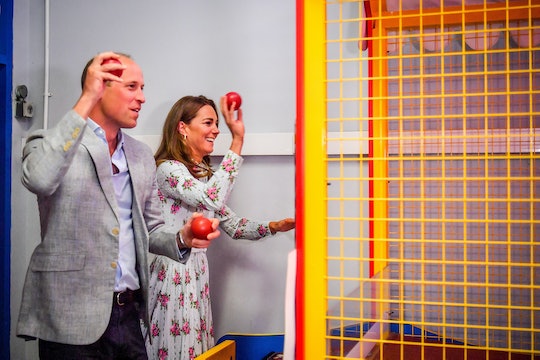 They don't often get handsy in public, but it's always delightful to see when Kate Middleton and Prince William enjoy a little PDA moment. Especially if they get a little lovey-dovey while hanging out in an arcade because is that not the most surreal scenario possible for a future king and queen?

The Duke and Duchess of Cambridge were visiting Wales this week on official royal business, hanging out at a seniors center called Shire Hall, where they had actually enjoyed a Zoom bingo night in May from their country home of Anmer Hall. Just because they were there on official business didn't mean the couple weren't ready to let loose and have a little fun. Like visiting Island Leisure Amusements on Barry Island, a resort area in Wales made famous by the classic UK comedy series Gavin & Stacey created by James Corden, as The Mirror reported.

The parents of 7-year-old Prince George, 5-year-old Princess Charlotte, and 2-year-old Prince Louis looked as though they were really loosening up as they visited the arcade. I mean, when Middleton had her hand on her husband's back as he played the claw game, it looked like it was just a regular date night with a particularly attractive couple. The proof is right there on their Kensington Palace Instagram page. I hope Prince William was trying to find a cute teddy bear for his wife.

To be fair, it's not exactly like Prince William swept his wife up into his arms and carried her off into the sunset or anything. But the Duke and Duchess of Cambridge tend to avoid public displays of affection, as Hello! Magazine has noted, so when royal fans see a little it's kind of exciting.

Especially when it isn't rebuffed. In December, royal watchers were abuzz with a possible awkward moment between Middleton and Prince William during the taping of their holiday special with The Great British Bake-Off's Mary Berry called A Berry Royal Christmas. There was a moment from the show where the couple was sitting by the fire and it looked as though Prince William reached to touch Middleton's arm and she shrugged him off, as evidenced by video shared on Twitter.

Who knows, maybe he was on her nerves that day or perhaps the Duchess of Cambridge simply enjoys the the thrill of the arcade. Whatever the case may be, it was a sweet moment, indeed.