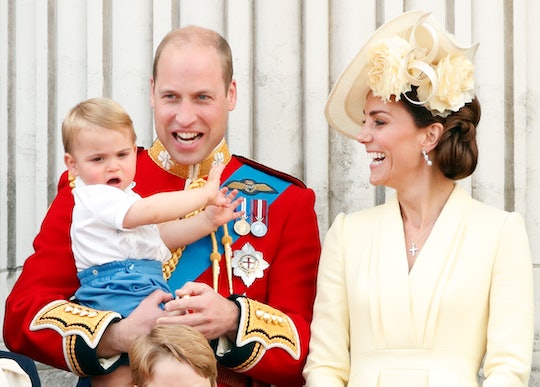 It seems that the Duchess of Cambridge's love of cooking has really begun to rub off on her children. In fact, one young member of the royal family appears to have already developed a favorite cookbook author. While filming a Christmas special with former The Great British Bake Off presenter Mary Berry, Kate Middleton revealed one of Prince Louis' first words was inspired by the famous TV cook. According to the Duchess of Cambridge, 19-month-old Prince Louis recognized Berry's face on a cookbook and correctly identified her as "Mary."

"One of Louis' first words was 'Mary' because right at his height are all my cooking books in the kitchen bookshelf," Middleton told the former The Great British Bake Off star while filming the upcoming holiday special A Berry Royal Christmas, according to the BBC. "Children are really fascinated by faces and your face is all over your cooking books and he would say, 'That's Mary Berry.'"

Prince Louis is apparently so enthralled by Berry that his mother was sure he would recognize cookbook author and once TV judge if he saw her in person. "He would definitely recognize you if he saw you today," she told Berry during filming, the BBC reported.

Of course, Prince Louis' interest in Berry likely stems from the fact that his mother is a fan of cooking and the cookbook author herself. But the Duchess of Cambridge isn't simply cooking up a storm alone in the royal kitchen; she told Berry she loves to get her three children involved.

"Yes, I really enjoy it," Middleton said when asked by Berry if she ever cooks with 6-year-old Prince George, 4-year-old Princess Charlotte, and Prince Louis, according to the BBC. "Again, for them to be creative, for them to try and be as independent as possible with it. Actually, one of the last things we cooked together was your pizza dough. We made pizzas with your pizza dough recipe. They loved it, absolutely loved it."

Middleton has been a fan of Berry's since at least 2013. That's when, as The Guardian reported, cameras had captured a meeting between the two women where the Duchess of Cambridge told Berry she was a "quite a big fan of her cookbooks." During that same event, Prince William reiterated his wife's love of the cookbook author when he entered the room a few minutes later. "My wife is a big fan," he told Berry upon meeting her. "As well as my tummy, my tummy is also a fan."

The royal couple are expected to put their skills in the kitchen to the test by baking festive cakes for their charity volunteers in Berry's upcoming holiday special. A Berry Royal Christmas will air Monday on BBC One.

More Like This
The Heartfelt Details You Didn't Notice In Kate Middleton & Prince William's Portrait
10 Ways Prince George & Prince Louis Are So Different From Each Other
You’ve Probably Been Pronouncing “Lilibet” All Wrong
Catherine Reitman Calls It Like She Sees It: “Being A Working Mother Is Impossible”