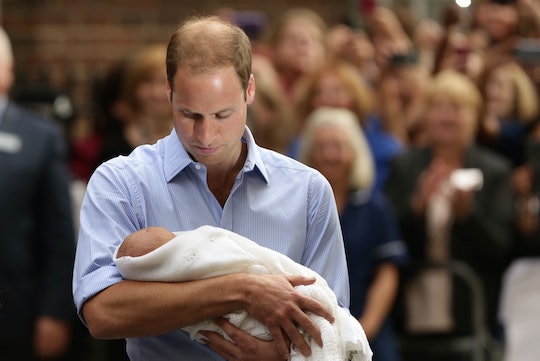 It has been six years since Prince William became a father but his wife remembers the moment like it was yesterday. During a recent interview, Kate Middleton described Prince William seeing their son Prince George after he was born, and if you thought he was an adorable dad before get ready to double down.

The Duchess of Cambridge recently sat down for a surprisingly personal interview with Giovanni Fletcher for her podcast Happy Mum, Happy Baby. Middleton, who was there to promote a new initiative she has championed for parents of young children called 5 Big Questions For The Under Fives, opened up about her own experiences as a mother to 6-year-old Prince George, 4-year-old Princess Charlotte, and 21-month-old Prince Louis, even sharing a bit of information about her first moments as a new mom.

During the podcast, Middleton talked about how she first felt seeing her baby, saying "it is extraordinary," adding, "how can the human body do that? It is utterly extraordinary, actually."Middleton went on to share that "[George] was very sweet, and [she was] sort of relieved that he was a happy, healthy boy." As for her husband Prince William, it seems as though he was also incredibly moved by the life-changing event, "Seeing… you know, your husband, William," she said, "seeing the pure joy of his face, it was really special."

Prince William also prepare for his big moment ahead of time as he knew he would have to be the one to put little Prince George in the car seat outside St. Mary's Hospital in London in front of a full press contingent. A moment Middleton has admitted during the same podcast she found "slightly terrifying" as she had just given birth for the first time.

The Duchess of Cambridge explained to Fletcher that Prince William actually practiced with a doll when preparing to put his little boy in his car seat, which is perhaps why it looked so effortless. As for is own feelings about his little boy, Prince William told the BBC in 2016 when his son was 3 that he considered his relationship with George a normal one. "I love my children the same way any father does," he told the BBC, "and I hope George loves me the same way any son does to his father, so we are very normal in that sense."

They might be a set of future kings, but it sounds as though at the moment of George's birth, Prince William was just seeing his baby boy.