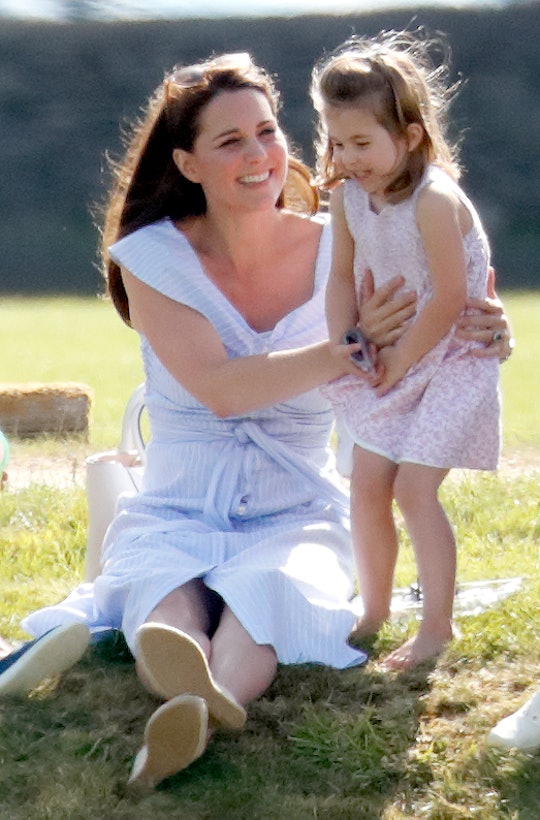 It's been a minute since royal fans have seen Princess Charlotte and her impish grin, but fortunately we have her parents giving us cute little updates. For instance, during a visit to Ireland Kate Middleton revealed Princess Charlotte is all about gymnastics these days, and I can just picture the little princess tumbling around the castle in her tiara (just kidding, she's not allowed to wear a tiara just yet).

The Duke and Duchess of Cambridge are currently on a three-day tour of Ireland without 4-year-old Princess Charlotte and her two brothers, 6-year-old Prince George and 22-month-old Prince Louis, according to the Daily Mail. But just because they're not together doesn't mean their kids are far from their minds. On the contrary, in fact.

When the couple were in Galway on Thursday, they caught a performance from a local band called NOOV, according to Hello! Magazine. After the band performed, the proud mom approached them and reportedly told them her kids would have loved the performance. "I wish we could have brought George and Charlotte along, they would have loved it! And George is just starting to learn the guitar," Middleton told them, according to People.

As for Princess Charlotte, it seems she could have done some tumbling during the performance because she has a fun new hobby, According to People, Middleton said, "Charlotte is really into gymnastics, she’s doing cartwheels, handstands, everything."

Princess Charlotte's new hobby is in keeping with one of her other favorite pastimes — dancing. Over the past few years, both of her parents have opened up about their daughter's love of dancing, ballet in particular. In fact, Middleton and Princess Charlotte went to see The Nutcracker ballet together in 2018 after telling English National Ballet director Tamara Rojo that her daughter "absolutely loves" dancing, according to Hello! Magazine. Now that Princess Charlotte is adding some gymnastics moves into her repertoire. she should be a well-trained ballerina in no time.

Gymnastics could help Princess Charlotte in other regards as well, according to Family Education. The spot helps to improve flexibility and encourages healthy lifestyle habits from a young age. Between he love of ballet and gymnastics, it seems Princess Charlotte is well on her way to being one talented little royal who can do cartwheels and handstands.