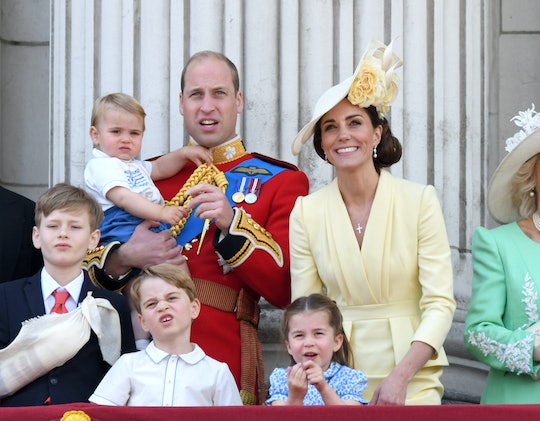 Good news: It turns out your kids aren't the only ones getting under each other's skin during the COVID-19 pandemic. Apparently even the royal kids have been struggling a little (and they live in a country manor right now so that's saying something). Kate Middleton said that Prince George is "grumpy" with Prince Louis, and it's probably not okay to find this information deeply satisfying but here we are.

The Duchess of Cambridge has been focusing much of her time on raising her three children — 6-year-old Prince George, 5-year-old Princess Charlotte, and 2-year-old Prince Louis — at the family home of Anmer Hall in Norfolk County during the pandemic. But she still finds time to help out with her royal duties, most recently lending her green thumb to plant a garden at the East Anglia's Children’s Hospices facilities in the area.

During her visit to the children's hospice, Middleton got to talking to some of the other gardeners on hand about her outdoor experiences with her own kids, according to People. That's when she opened up about a little competition between her sons that has apparently irked Prince George: "The children are really enjoying growing their sunflowers. Louis' is winning, so George is a little grumpy about that!"

This isn't the first time little Prince George has gotten irritated with his younger siblings. Back in May, Middleton opened up in a video chat with veterans about the trials and tribulations of homeschooling, admitting that Prince George was more interested in his little sister's work than his own, "We’re stuck into homeschooling again. George gets very upset because he just wants to do all of Charlotte’s projects. Spider sandwiches are far cooler than literacy work!"

Of course, being the oldest can be tough. Especially when, like Prince George, you're home with your little brother and sister day in, day out. Although let's face it; the person who really deserves our empathy here is Kate Middleton. She described a day in the life of the quarantine lockdown at her home in a BBC interview in April, noting, "The children have got such stamina. You pitch a tent, take the tent down again, cook, bake. You get to the end of the day — they've had a lovely time, but it's amazing how much you can cram into a day, that's for sure."

So sure, Prince George might be feeling a bit grumpy about his sunflower not growing as quickly as Prince Louis' has been. But it's a small price to pay for living each day in a literal garden with your mom.