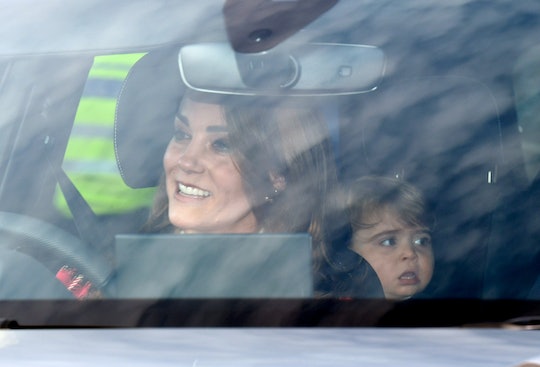 I really admire Kate Middleton, but not for the reasons you might think. Sure, she has a ridiculously perfect mane of chestnut hair, she's the future Queen of England, and is a passionate supporter of children's charities. That's all well and good, of course, but today I admire Middleton for taking her three kids to lunch with the Queen in festive sweaters... and those sweaters all looked clean. This, my friends, is what a true hero looks like.

The royal family has a rather extended Christmas season, and Wednesday, Dec. 18, was the big kick off. Every year, Queen Elizabeth hosts the senior members of the royal family for a Christmas luncheon at Buckingham Palace as an official open to the holidays, according to the Daily Mail. And obviously you don't get much more senior in the royal family than the Duke and Duchess of Cambridge, who are in line to sit as the King and Queen of England after Prince William's father, Prince Charles. So, naturally, they were on hand for the Christmas lunch, along with all three of their children.

While 6-year-old Prince George arrived in a separate car with his father, photos show 4-year-old Princess Charlotte and 18-month-old Prince Louis were driven by their mom. And what a festive-looking little group they made. There are no photographers allowed into the private event, which means royal fans have to settle for pictures from the car. But it was enough to see little Prince Louis looking especially festive in a green sweater... and also a whole lot like his big brother Prince George.

Considering how presumably formal lunch with the Queen must be, I think everyone would agree it's pretty impressive that Middleton brought all three of her kids along with her. Especially since the 92-year-old monarch reportedly has some pretty strict rules about how the luncheon proceeds.

For instance, according to The Sun, she's all about kids eating in one room and adults eating in another. Sure, this sounds like it would make Middleton's job as a mom easier, but anyone who has been at a family dinner where the kids sit away from you knows you spend the whole time chasing them.

Beyond today's lunch, the Cambridge family is in for a busy few weeks over the holiday season, as they're planning to attend the annual royal Christmas events at Sandringham Estate in Norfolk County. This year, Prince George and Princess Charlotte are expected to be included in the traditional walk to St. Mary Magdalene Church with the rest of the royals.