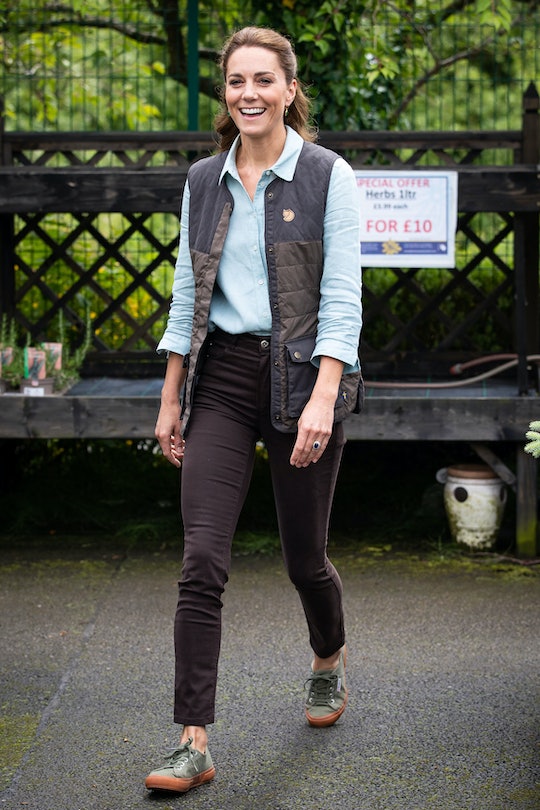 It should come as a surprise to exactly no one that the Duchess of Cambridge is a pretty gentle parent. Kate Middleton reportedly uses a "chat sofa" to problem-solve with her three children instead of a time out, and considering how sweet all of the royal kids appear to be it might actually be working out nicely.

Middleton and Prince William have been spending extra family time together at their country home of Anmer Hall in Norfolk County in recent months due to the pandemic. Like so many parents across the globe, they've been dealing with extra duties with their three kids, such as homeschooling their 6-year-old son Prince George and 4-year-old daughter Princess Charlotte and presumably keeping pretty busy with their 2-year-old son Prince Louis, who apparently loves to hang up on family Zoom calls, as Prince William told the BBC in an interview in April. ("For some reason he sees the red button and he always wants to press the red button.")

So how does Kate Middleton deal with little issues that might come up with her three kids during the lockdown? She's not one for losing her temper. Instead, a royal source told The Sun, "There’s no ’naughty step’ but there is a ‘chat sofa’. The naughty child is taken away from the scene of the row or disruption and talked to calmly by either Kate or William."

As for shouting, it simply is not done in the royal household. "Things are explained and consequences outlined and they never shout at them. Shouting is absolutely ‘off limits’ for the children and any hint of shouting at each other is dealt with by removal.”

The Duchess of Cambridge has long been a fan of a less reactive parenting style. Middleton is reportedly such a big fan of the parenting book The Modern Mother’s Handbook: How to Raise a Happy, Healthy, Smart, Disciplined and Interesting Child, Starting from Birth (which was written anonymously) that she sent the unnamed author a letter telling them how much she appreciated the advice, as per Chatelaine.

She's implemented that advice in public, like getting down to a child's eye level when having discussions and accepting help (Middleton's mother Carole is reportedly a big help to her daughter as is the family's nanny Maria Borrallo). Keeping calm during tantrums is another helpful bit of advice, and Middleton's decision to take it one step further and get comfy on the "chat sofa" is proof that she has mastered parenting, I guess.

I might need a moment on the chat sofa myself for feelings of maternal inadequacy.

More Like This
The Heartfelt Details You Didn't Notice In Kate Middleton & Prince William's Portrait
Ryan Reynolds Jokes His Daughters Are So “Wild,” He Thinks “They Have Rabies Sometimes”
Jenny Slate Played Our Parenting Edition Of Never Have I Ever & Here’s What We Learned
You’ve Probably Been Pronouncing “Lilibet” All Wrong