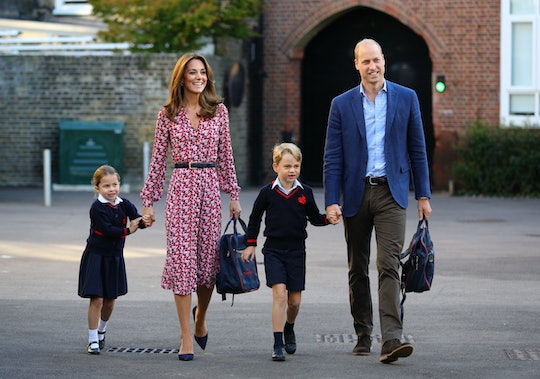 So here's a real thinker for you: there are loads of little girls all over the country getting ready to dress up as a princess for Halloween this year. But if you're a little girl who's already a princess, what do you wear as your costume for Halloween? Throwing on a tiara and a ballgown à la Cinderella might feel a bit too meta, know what I mean? But one must assume that royal kids want to don costumes for Halloween, it's kind of a universal thing. In fact, there's proof. Recently, Kate Middleton was spotted Halloween shopping with her kids, Prince George and Princess Charlotte, and now all I can think about is what sort of costumes they picked. This could be a perfect occasion for them to go door-to-door like regular folks totally in disguise.

While some North Americans might be surprised to realize this, the concept of trick-or-treating actually originated in the United Kingdom in the Middle Ages, according to History.com. Halloween is an old Celtic tradition based on the festival of Samhain, when people would put on costumes to ward off and tricky evil spirits. While Americans and Canadians have really taken over the concept, it seems British kids get just as pumped about Halloween. And the royal kids are apparently no exception.

Middleton was recently spotted shopping with her 6-year-old son Prince George and 4-year-old daughter Princess Charlotte for Halloween supplies at a Sainsbury's store in Hardwick, Cambridgeshire, according to a new report from The Mirror. The store is sort of a catch-all supermarket that sells home goods, groceries, and clothing much like Target, which tells me the Duchess of Cambridge would be a Target mom if she lived in America.

Local shopper Kathy Whittaker told The Mirror that she was shocked to see the royal mom and her two kids just casually shopping for Halloween items on Thursday. Middleton even reportedly used the self checkout, if you can believe it. As Whittaker explained to the news outlet, Middleton was seen looking at costumes with her kids while a bodyguard made sure no one bothered her for pictures. "She was with Charlotte and George looking at Halloween outfits but her bodyguard was kind of watching people with phones and telling them no pictures," she told the publication.

Whittaker said she did take a picture, but wasn't able to see what the royal mom bought for her kids. "I think she bought some Halloween bits for her kids but I don't know what," she told The Mirror.

So it's still anyone's guess what Prince George and Princess Charlotte might wear for Halloween, although it looks like they won't be trick-or-treating door to door like most kids. Instead, a palace insider reportedly told Us Weekly that Middleton and Prince William will carve pumpkins and bake treats with their kids for the spooky holiday, but that's about it. Still, Middleton is apparently baking Halloween cupcakes with her kids, according to Us Weekly, so that sounds pretty amazing.

Kate Middleton might be a royal mom, but it sounds like she is also making every effort to be a regular mom. Buying Halloween costumes at a superstore and using the self checkout and everything.