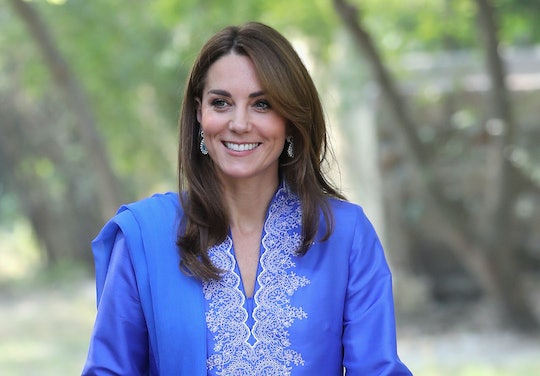 The Duchess of Cambridge might be one of the most famous women in the world, but this doesn't mean she leads a very public life. When Kate Middleton isn't carry out royal duties, for instance, she's spending private time with her three kids and husband, Prince William. This level of privacy applies to social media as well, as the mom isn't on any platforms. So when Kate Middleton shared her first Instagram post on the couple's official royal account, people naturally took notice. As for why she shared the personal message? It all circles back to an important cause.

Middleton, who has been busy wrapping up her tour of Pakistan (Pakistan in part of the British Commonwealth and held a special place in Princess Diana's heart), was clearly struck by her visit to a local SOS Children's Village orphanage. That's because she released a direct quote to the couple's shared Instagram account, Kensington Royal, to drum up support for the organization.

"The community at the SOS Village is built around family - and the best possible family you could imagine - where everyone comes together to nurture, love and protect the children in their care," the Duchess of Cambridge wrote in her Oct. 20 post, with the quote ascribed to "Catherine" aka Middleton's full name.

She added alongside a picture of Prince William playing with two young boys, "These vulnerable children, many who have come through traumatic circumstances, are nurtured in this caring environment and are able to form these quality relationships that they so desperately need to thrive."

Fans will note that the new account was only formed in the past year after Prince Harry and Meghan Markle split off from a former social media account shared by both brothers and their families. The couple went on to form their own foundation, so that each wing of the royal family could focus on issues that matter most to them directly. And this message from Middleton marks the first personal message she has shared to the revamped Kensington Royal account.

It's not like Middleton has been hiding, however, as she's given plenty of speeches about the importance of early childhood education and mental health, all the while launching community gardens in London. It's just that the royal rarely speaks directly to the press or on social media.

But it appears Middleton, a passionate philanthropist, is taking a page of Markle's book by being more open with the media about her message and mission, according to Harper's Bazaar. That's because Middleton recently gave her first official news interview since November 2010, talking with CNN about the Pakistan trip, according to Cosmopolitan.

"It’s been fantastic, we’ve seen a lot of Pakistan," Middleton told CNN. "It was amazing seeing some of the geography, but then to see some of the community activities like this has been really special."

Of the orphanage she toured, Middleton added that she was thrilled to visit a place where the goal is to "protect the next generation of children in their care and give them the best possible start to their future lives," according to Town & Country.

It's hard to imagine this is indeed the first direct, official quote Middleton has shared to social media, but I have only one thing to say: I can't wait to hear more from the Duchess of Cambridge directly.