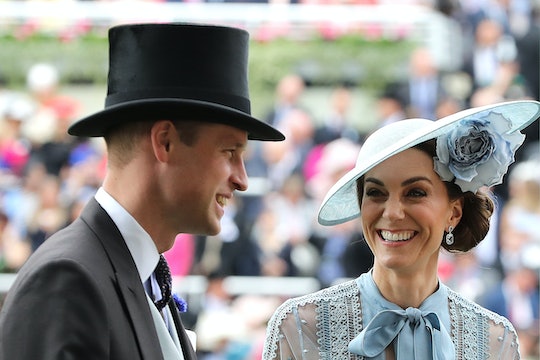 What do you get for the man who has everything? I feel like this was once used in a commercial to sell, like, cologne or something back in the '70s when I may have been a small child. But the thing is, for some people this is actually a real problem. People like the Duchess of Cambridge, for instance. What in the world could you possible give a man who will one day be the King of England? Well everyone relax, she figured it out. Kate Middleton's homemade birthday present to Prince William is apparently just about the sweetest, most thoughtful gift. And the brilliant part is, it's also a gift that pretty much only she and their children could give him.

Prince William turned 37 on Friday, and because he's second in line to the throne this is obviously a pretty big deal. His birthday was celebrated on Kensington Palace' social media feed as well as by Clarence House (the official house of his father Prince Charles and stepmother the Duchess of Cornwall), and Buckingham Palace. But those are just the public well wishes, of course, very formal and careful and such. When it comes to his family, Prince William's birthday was reportedly celebrated in a much more heartfelt manner.

A palace source told The Sun that the Duchess of Cambridge and her three children, 5-year-old Prince George, 4-year-old Princess Charlotte, and 1-year-old Prince Louis, spent the past year making a special scrapbook of family photos for the Duke of Cambridge. Although I have a feeling Prince Louis didn't really pull his weight on account of being a baby, this was apparently a big secret project the entire Cambridge family was involved in, as per The Sun:

Kate and the children have been compiling a large album of the children’s paintings, drawings and collages and prints. They reflect what they have been doing over the past year. You can look at any event they were involved with as a family, and there will probably be a picture, drawing, print or photo.

The special album, which Middleton reportedly coined "Den There Were Three," was apparently stashed away at her sister Pippa Middleton's home so Prince William wouldn't find out about it.

Can I just say kudos to Prince George and Princess Charlotte for keeping that secret... my kids wouldn't have made it through one day with any secret at that age.

This isn't the first time Middleton has gone the homemade route when it comes to gift giving. Back in 2016 she admitted in a BBC documentary that she gave her grandmother-in-law Queen Elizabeth a jar of homemade chutney for Christmas the first time they spent the holidays together, as per Town and Country:

I thought back to what I would give my own grandparents. And I thought, 'I'll make her something,' which could have gone horribly wrong. But I decided to make my granny's recipe of chutney.

It didn't go wrong; Middleton said the chutney was on the table for the royal family's meal the next day.

Because I guess that's what you give the person who has everything, isn't it?

You give them something to show them you love them. Something that could only come from you.