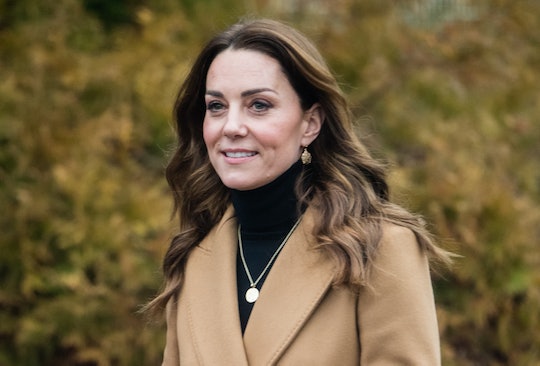 The Duchess of Cambridge is obviously a style icon. Every time she wears a skirt everyone immediately wants to run out and buy it. And while she clearly puts a lot of thought in the style choices she makes on a daily basis, some items have more significance than others. Kate Middleton honored her kids with some jewelry recently, and it was such a simple gesture that of course I immediately want to go out and copy it.

Middleton has been traveling around the United Kingdom for the past few days to promote a five question survey about early childhood development she has championed as part of her charitable efforts, according to Harper's Bazaar. While the Duchess of Cambridge has several different charities she supports with her royal patronage, she has made it patently clear in recent years that her primary focus is children; specifically, children's mental health and how it's affected by those important first years. Naturally, when Middleton is traveling around the United Kingdom meeting young kids, her own children are never far from her mind. Which is perhaps why she wore a sweet gold necklace engraved with the initials of her three children, 6-year-old Prince George, 4-year-old Princess Charlotte, and 20-month-old Prince Louis, while visiting Cardiff in Wales on Wednesday.

The gold necklace featured the initials G, C, and L, and was created by British jeweler Daniella Draper, according to E! News. While Draper has several different personalized necklace options available, Middleton wore the Gold Midnight Moon version, which retails for around £1,070 (approximately $1,400). Middleton's necklace wasn't the only way she showed the people of Cardiff that she had her kids on her mind. When she visited the Ely and Caerau Children's Centre, she opened up about living in Wales when her first son was born and feeling incredibly isolated. At the time her husband Prince William was working as an air ambulance pilot for the Royal Air Force and as she explained to the parents in Cardiff, she would have loved to have a community space like that one to help her with the loneliness:

It's nice to be back in Wales. I was chatting to some of the mums. It was the first year and I'd just had George — William was still working with search and rescue — and we came up here and I had a tiny, tiny baby in the middle of Anglesey. It was so isolated, so cut off. I didn't have any family around, and he was doing night shifts. So… if only I had had a center like this.

That's the thing about Kate Middleton; yes she's very stylish and all of that. But she also wears her love for her kids openly at all times. On her face, and in a lovely piece of thoughtful jewelry around her neck.