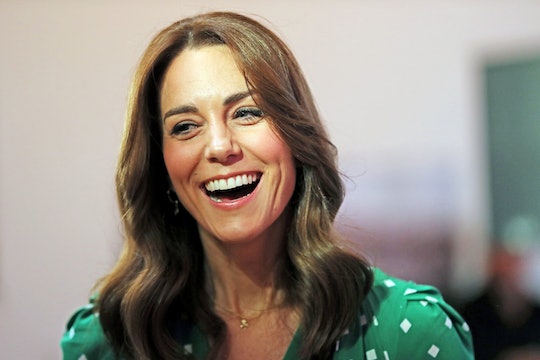 Over the weekend, the Duchess of Cambridge shared a beautiful photo of her husband and children hanging out on a backyard swing to celebrate Prince William's birthday. While the photo of the Cambridge crew was endearing enough on its own, it turns out the swing in Kate Middleton's new photo has a sweet and personal meaning that makes it all the more touching.

Prince William turned 38 on June 21, and one of the sweet ways his family celebrated his birthday was to share some personal photos. Middleton has long since proven to be a gifted photographer, particularly when it comes to her family, and this year's crop were especially lovely. Rather than issuing a staid, formal photo to celebrate the birthday of the future King of England, the Duke and Duchess of Cambridge instead chose to share a photo of Prince William with his three children — 6-year-old Prince George, 5-year-old Princess Charlotte, and 2-year-old Prince Louis — posing together on a backyard swing.

It turns out this wasn't any old swing either. According to People, the swing was actually a wedding gift given to the couple when they got married in 2011. An employee from the Oak & Rope company told the magazine that the swing was engraved with their names, "William & Catherine." It reportedly hangs on the grounds of their country home of Anmer Hall in Norfolk, where the family has been staying during the coronavirus lockdown in the United Kingdom.

The swing, which is reportedly made from oak and natural rope and sells for around $600, has been featured in some of the family's famously candid, outdoor photos before. When her oldest son Prince George turned 3, he posed on the swing for photographer Matt Porteous, wearing shorts and a t-shirt and looking just like his little brother Prince Louis.

The names "William & Catherine" are especially clear in this photo, although there's bound to be some fading after four years of use by three children.

Middleton has long been an advocate for the positive benefits of the outdoors for kids, so this swing does appear to be a perfect gift for her. In fact, when she created her "Back To Nature" garden for the 2019 Chelsea Garden Show, she included a rope swing in her display. And last July, she joined the Backyard Nature campaign to further encourage kids to play outside, saying: "Spending time in nature can play a pivotal role in helping children grow up to become happy, healthy adults."

If ever there was a royal couple to gift with a rustic-looking backyard swing, the Cambridges do seem to be the perfect candidates. Just look at those smiles.