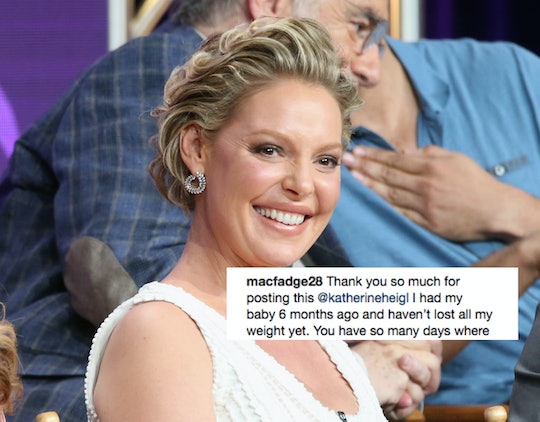 Almost a year after Katherine Heigl gave birth to her son, Joshua Bishop, she took to Instagram on Tuesday to share an update about her postpartum body. Heigl, who also has two young daughters with her husband, Josh Kelley, stripped down to her bra and underwear to give her followers a complete visual of her post-delivery journey. Katherine Heigl's pictures of her postpartum body are drawing serious praise from moms. And, though most responses are awesome, some well-intentioned people also think it's fine to tell Heigl how she should feel about her own body, and it's actually more damaging than you might think.

Ever since Heigl welcomed Joshua into the world in January 2017, she has shared countless updates about his development and the first year of his life. What Heigl hasn't been as open about, however, is her postpartum body. In fact, Heigl's Instagram feed doesn't feature one workout pic or a message about her post-delivery figure. So, one can imagine that it took a lot of courage and strength for her to share three pictures of herself in very little clothing to the world. Although it probably wasn't easy for Heigl to post the snaps, she ultimately felt it was important to enlighten fans about how hard she had to work to get "back in shape." Similarly to other celeb moms out there, like Blake Lively, Heigl wants people to know that achieving a health goal is a journey and not a race.

It’s been almost 14 months since Joshua Jr was born and it has taken me about that long to really get back in shape. The first pic was taken one month after he was born. The second pic was taken almost a full year later and the last pic was taken this weekend. I wish I had a few from in between the first and second so you could really see how slow my progress was but alas...I was busy covering it all up those months, not posing in my unders! Anyway, I have a beach vacation coming up, a new job I start filming in April and my deep desire to feel fit, strong and sexy propelling me forward the last two months to finally loose the last of my baby weight and do a deep dive search for the ab muscles I knew were buried under that belly somewhere! ... I am so grateful I’ve had a full year to find those ab muscles and get my butt back up where it belongs and wasn’t forced by work to snap back into shape but it is time to make the strength, fitness and overall health of my body a priority … "

As you can probably tell from Heigl's note, she's thrilled with the 14 months of progress she has made. Most of all, it's abundantly clear that Heigl is happy, and many fans took to the post's comments section to celebrate her joy.

Other fans took the opportunity to praise Heigl for being honest about her journey. "Wow love this," someone wrote. "An amazing Hollywood actress keeping it real & honest about how hard it is to lose the baby weight! You look fantastic." Another person added: "I find this very inspiring! Thanks for all your honesty."

And a number of moms were commenting on Heigl's photo to say they're actually using the same workout that she is (the Bikini Body Guide). Another mom commented:

thank you for this I am a mother of two and with my last baby who was born in summer 2015 I’ve still not fully achieved my body. But working out 5-6 Days a week and am much closer now. I am inspired to keep it up after seeing your post.

Others were tagging their mom friends in an effort to help lift them up. One fan tagged a friend and said, "look read her stuff look how long it took her like u said it’s not easy. U are doing great! Patience is key u look beautiful in every way shape and form." OMG, yes.

Though moms were rallying around Heigl, some people couldn't help but give their two cents about how she looked better before her fitness journey. "Hi Katherine, Good for you on getting fit but I think you look best in the first pic," one person wrote. Another follower added: "Honestly, I like the first picture the most!" "You look beautiful in the first pic," someone else said.

To be fair to these fans, I think it's a safe bet they meant no harm by their comments. Heigl's supporters probably intended to uplift Heigl and to remind her that she looked great after giving birth to Joshua. The problem here, however, is that these comments are telling Heigl how she should feel about her own body.

Heigl didn't ask for an opinion about her transformation, and I don't think she was looking for any constructive feedback from fans. The post is clearly a celebration of what she deems healthy for herself physically and emotionally, which is something to be congratulated instead of questioned. Even if you think Heigl didn't need to lose weight or that she looked perfect before, it's not your place to tell her that. Heigl is entitled to feel however she wants to about her postpartum body.

Not to mention, it can be quite hurtful for someone to hear that they looked better before they reached a fitness goal or made some type of meaningful transformation. Whether it be a haircut or losing weight, it's best not to question a stranger or loved one's personal choice and to encourage feelings of self-doubt, intentionally or not.

At the end of the day, Heigl feels awesome about her body and that's what's most important here — something many of the moms commented on her post lovingly pointed out. And one can only hope that Heigl's fans will celebrate her for who she is and not who she was.