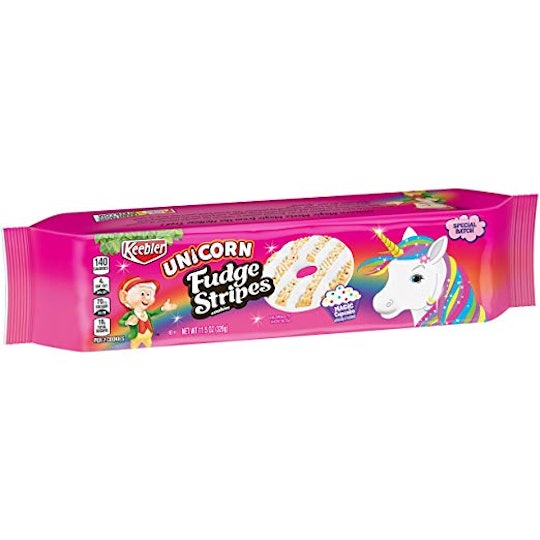 Since the world's collective love of the horned creature really started trending just a few short years ago, fantasy-lovers have been blessed with unicorn shirts, purses, party gear, and even colorful drinks from Starbucks inspired by the mythical beasts. I thought every unicorn-themed product imaginable had already been created, but then came along Keebler's Unicorn Fudge Stripes cookies that taste like cupcakes. It's basically a New Year's miracle.

Quick unicorn recap: the long-fabled animals that were once only loved by Lisa Frank fans started trending in 2012, but really skyrocketed in 2016, according to Refinery29. Unicorn products have seriously been everywhere since then as the mass market served the fantasy-loving community anything and everything with a horn on it. North West and Penelope Dissick even had a unicorn-themed birthday party last year.

So the hype allowed people to get whatever they wanted unicorn style, and in my humble opinion, unicorn-themed foods are the best thing to come out of the trend, especially if you're a sweets lover. They're usually sugary and colorful, which leads to many delicious snacks that also have mad social media appeal. I already mentioned the Starbucks limited edition Unicorn Frappuccino® Blended Crème that were uber popular when the coffee chain released them in April 2017 (also because of their Instagram-worthy aesthetic in part, as USA Today explained), and Unicorn-inspired cocktails became a fun party drink too, according to Cosmopolitan. Publisher Workman even released an entire recipe book of dishes inspired by the trend called Unicorn Food by Kat Odell lat year, which proves that the trend is still going strong.

So if there's already an entire cookbook of unicorn dishes, and more blog posts on unicorn-themed desserts than we can count, where does one go from here? Answer: Keebler's twist on their classic Fudge Stripes cookies to ring in the new year.

As Bustle reported, the official name of the baked goods are Keebler Unicorn Fudge Stripes Magic Cupcake Cookies, which is a mouthful but does explain what's so exciting about them. The sweet treats don't look too different from the original, just having white frosting instead of chocolate, but the taste is out of this world and definitely a change from the Keebler classic thanks to the cupcake flavor. The foodie unicorn community has already fully embraced these new cookies, and the reviews are pretty magical, PopSugar reported, with customers loving the cupcake flavor and colorful sprinkles.

Buying these goodies is a no brainer if you're a unicorn fan or just have a sweet tooth, but you'll want to move quickly to be sure you can try them. Walmart has the cookies labeled as "Special Edition" on their site according to Delish, which means they might be just as elusive as their namesake. You better snag a box soon if you want to taste the magic; who knows when you'll get the change again?