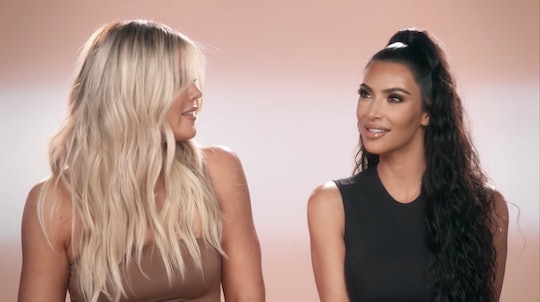 'KUWTK' Isn’t On Tonight, But The KarJenners May Still Grace Your Screen

One week ago, Keeping Up With The Kardashians fans sat through the newest episode with baited breath. The episode chronicled the week leading up to Khloé Kardashian giving birth to True, which, as you probably know, was when she (and the entire world) found out her boyfriend, Tristan Thompson, had allegedly cheated on her. I've personally been looking forward to the followup episode all week, but apparently, Keeping Up With The Kardashians isn't on tonight, Sunday Nov. 11. But fear not, because a few Kardashians may still be gracing your screen.

It's unconfirmed if any of the KarJenners will be attending tonight's award show, but hopefully a few of them will be there to represent the fam. The show has a few awesome singers slated to perform, including Nicki Minaj, John Legend (friend of the Kardashian family), and Rita Ora. Additionally, Victoria Beckham will be named the People's Fashion Icon, and Melissa McCarthy will be crowned the People's Icon.

Thankfully, KUWTK will be back to its regularly scheduled programming next Sunday, Nov. 18. But if you really need a dose of KarJenner drama before then, it looks like E! is airing a few KUWTK repeats tonight. The first three episodes of Season 13 ("Time to Dash," "Paris," and "The Aftermath") will play after the E! People's Choice Awards concludes.

Last week's episode of the reality show, "The Betrayal," was quite the doozy. The episode chronicled Khloé and her family discovering leaked footage of Tristan making out with another woman just days before she was set to give birth in April of this year. First, The Daily Mail published a video of a man purported to be Tristan kissing another woman at a NYC bar the previous evening. And then later that day, TMZ published footage from the previous October of Tristan canoodling with three women at a bar in Washington, D.C.

In the episode, Kris, Kylie, Kim, Kourtney, and Kendall are all struggling to deal with the news as they try to support Khloé, who is miles away in Cleveland, Ohio, while the family is in California. Kylie wound up breaking the news to Khloé, and the episode documented a few of the family's phone calls with a stressed Khloé after she found out. The upcoming episode is supposed to show footage of Khloé in Ohio and giving birth, so mark your calendars for Sunday, Nov. 18.