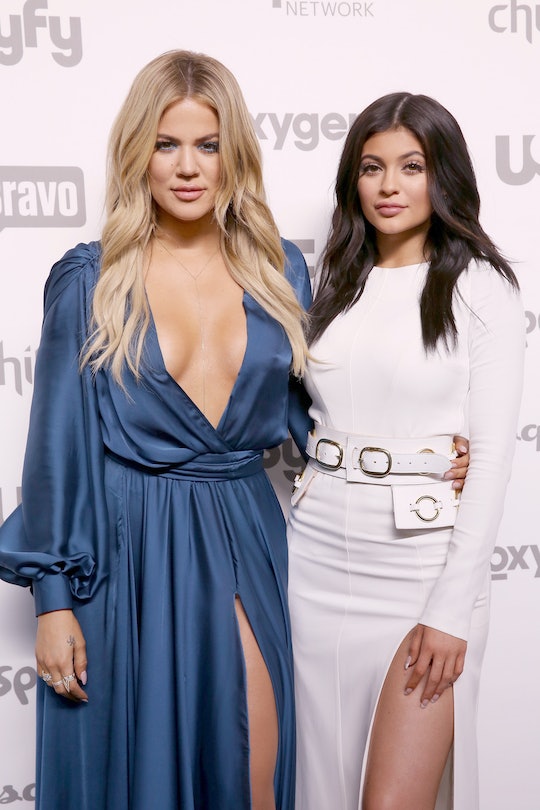 Here's How Khloe Found Out About The Tristan Cheating Scandal

Just days before Khloé Kardashian gave birth to baby True this past April, a scandal broke. Footage of her boyfriend Tristan Thompson cheating on her leaked, and quickly began circulating online. It was the infidelity heard 'round the world, and it was all fans could talk about, even after Khloé welcomed her baby girl. Now, more than six months later, fans are finally learning what that all looked like inside the KarJenner universe. In a Keeping Up With the Kardashians clip shared to YouTube by E! Entertainment, it's revealed that Kylie Jenner told Khloé about Tristan's cheating scandal when it first broke.

The two-minute clip opens up on a car ride shared between the very random pairing of Kendall Jenner and Scott Disick. "I'm like in shock right now, I don't even know what to say. It's a sick joke," Kendall says, upon finding out about the news. Scott, who is driving, looks over at Kendall's phone screen several times during the car ride, which makes me feel very nervous.

At the very same moment, Kim is on the Keeping Up With the Kardashians set, being interviewed. She looks down at her Kimoji-covered iPhone, and tells the crew, "There's video of Tristan making out with a girl last night." "Oh no!" a producer is heard responding. "I know. Khloé's gonna die," Kim says back.

Shots of Kourtney walking around, staring at her phone (which honestly could have been from any other day...) are paired with her commentary on the scandal. "I can't even imagine being in Khloé's shoes. Just how reckless it all seems," Kourtney tells the camera. "This is really shocking, and obviously heartbreaking. The whole thing makes me disgusted."

Then, Kim reveals that Kylie informed Khloé of the news by sending her an article about it. "Kylie just sent Khloé the article. Like, do I call Khloé?" Kim ponders.

Cut to: Kylie getting her hair and makeup done simultaneously, while scrolling through her phone. "No one has the courage to tell Khloé, because we knew she was days away from giving birth. We didn't want to stress her out, but we knew that it was the right right thing to do," Kylie tells the camera. "So, I'm the one that told Khloé. I didn't want to hurt her feelings, but I felt like she should hear from one of us versus on the internet."

The clip did not show the moment when Khloé heard the news from Kylie, but perhaps that will make it into the next full episode of Keeping Up With The Kardashians, which airs Sunday at 9 p.m. ET. on E! Khloé already revealed that tonight's episode is an "uncomfortable and super emotional one" in a tweet thread on Sunday.

In case you need a refresher on the whole alleged cheating scandal... On April 10 of this year, The Daily Mail published footage of a man purported to be Tristan kissing another woman at a New York City bar the previous evening. That same day, TMZ posted footage from the previous October of Tristan getting cozy with three women at a Washington, D.C. hookah bar, when Khloé was already pregnant with True.

Khloé and Tristan are still together, working on their relationship and reportedly going to couple's therapy, so it will certainly be interesting to see exactly how KUWTK portrays that rocky time.