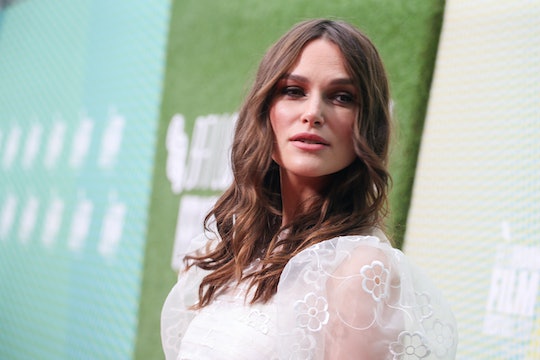 "My Boobs Will Explode": Keira Knightley Hilariously Details The Reality Of Pumping

I haven't breastfed any babies for quite a few years, so you would think I might have forgotten what it was like. I haven't. Probably I will never forget how it feels to need to feed your baby and they just aren't hungry. And your breasts are so incredibly sore in a way you maybe didn't know breasts could be sore. Achy and tender and just full. Unless you have experienced this feeling, you just don't know. But if you haven't, no worries —  Keira Knightley detailed breastfeeding and pumping demands in a recent interview with hilarious, perfect accuracy after giving birth to her second daughter. So perfectly, in fact, that I accidentally clutched my own breasts in a sort of flesh memory of how it all feels.

The Pride & Prejudice actress recently welcomed her second baby with husband James Righton, little girl Delilah, according to Metro. They are also the proud parents of 4-year-old daughter Edie. Delilah is around 7 weeks old now, which means she is just getting accustomed to a feeding schedule. While Knightley is technically on six months maternity leave, she took time away from her little girl to do some promotional interviews for her new movie, Official Secrets, which means leaving her daughter for a few hours at a time. And that also means pumping breast milk — both for Delilah's nourishment and for her own comfort.

As Knightley explained in an interview with The Telegraph, she pumped several hours' worth of breast milk for the safety of all those around her. "We're going to be apart for six hours in total, so I pumped three feeds' worth," she told the publication. "If I don't do it my boobs will explode. I mean, quite literally. It's going everywhere. So, you know, that's not happening. The pump is with me. It's fine."

She went on to proudly admit she made it through an entire afternoon "without a leak," and if anyone out there thinks that's no big deal, they need to give their heads a shake. Leaking breasts happen a whole lot, especially in those early weeks after giving birth, so this is clearly a victory for Knightley.

The actress also noted in a recent interview on BBC Breakfast that she is essentially a slave to her breastfeeding schedule. "I’ve gotta get back before 6:30 because that’s the feed — it’s going to be fine, we’re going to make it. I definitely have to deal with pumping. Everyone has to deal with pumping — I mean, if you’re doing that and it’s working. If you want to do that and if you can do that — then yes, we’re pumping. Pumping. So much pumping.

Clearly baby Delilah doesn't care that her mother is a pretty big star. Like all babies out there, she seems like she's only interested in her own feeding schedule. Such is life with a young baby, no matter who you are apparently.

Although I must admit I appreciate the fact that Keira Knightley is willing to be so open about what it's like to try to figure out pumping and breastfeeding schedules. Even if it did give me a bit of breastfeeding PTSD.