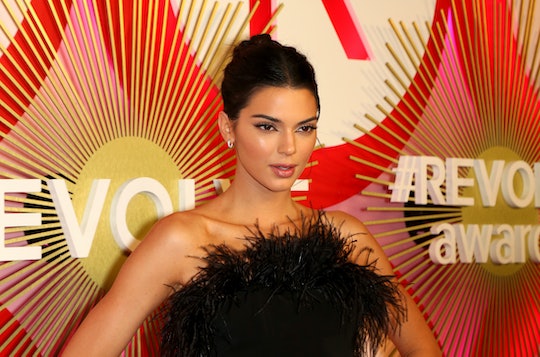 Kendall Jenner Is Finally Dishing About Her Love Life & Yup, Marriage Came Up

The Kardashian-Jenner family puts a lot of their lives out their for the public to see, even the ugly parts. Some members of the famous family are more secretive than others, though. Kendall Jenner, for one, is notoriously private, especially when it comes to matters of the heart. She rarely speaks on her boyfriends publicly, but all that is changing. Jenner finally dished about her love life, including the prospect of marriage, and fans are freaking out.

In an interview with Vogue Australia, the 23-year-old model opened up a bit about her relationship with Australian NBA player Ben Simmons, revealing that marriage is a possibility, but isn't on the horizon right now. She also admitted that watching her sisters' relationships be judged by the public taught her a lot. Jenner said she realized that some things are more special, and should be treated as "sacred." Additionally, she told Vogue Australia that many young romances are uncertain and she doesn't "want to bring too much attention to something" she isn't sure will last. It's not just romance she treats this way. Jenner said friendships are equally personal to her, telling Vogue Australia that putting them out there like that only serves to complicate things.

"Maybe. Definitely not now, but maybe one day," Jenner said when asked if marriage was in the cards for her. "I got a glimpse of how my sisters dealt with [the attention] and it's cool to learn from that."

"For me, a lot of things are very special and very sacred, like my friends and relationships, and I personally think that bringing things into the public makes everything so much messier," she continued, according to Vogue Australia.

Jenner first confirmed her romance with Simmons, 22, during an appearance on The Ellen DeGeneres Show in February, according to People. She declined to reveal exactly how long she and the Philadelphia 76ers player had been together, but did say it had been "a bit." She was otherwise quiet about the romance during the talk show appearance, though. Jenner didn't comment on the seriousness of their romance, or any other aspects of her relationship with Simmons.

Around the same time Jenner went public about the relationship, Us Weekly reported that things were getting serious between the two, but not so serious that wedding bells were sounding. An insider told the outlet they were "very into each other." The source added, however, "they're not serious to the point where they'd get engaged any time soon." Jenner and Simmons were said to be "enjoying their relationship," Us Weekly reported. At the time, the reality TV personality had been attending many of Simmons' basketball games, sitting courtside cheering him on while he played.

There's no telling where Jenner and Simmons' relationship will lead, but things are looking promising for the pair. Fans are hopeful that she'll continue to provide them with snippets into her love life in the future. Perhaps the next big reveal she'll make will be an engagement announcement. Only time will tell, but those who follow Jenner closely are crossing their fingers that's where this leads.